The Los Angeles Lakers played the Sacramento Kings on Friday and star LeBron James was seen wearing a Colin Kaepernick’s branded shirt before the preseason game. Kaepernick became a national figure in 2016 when gave way to controversy by choosing to kneel on one knee rather than stand while the during the National Anthem of the United States before a NFL game. 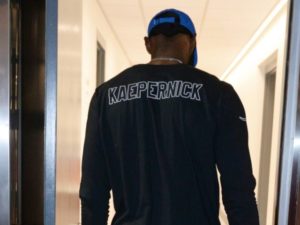 When reporters questioned James about the shirt, he replied, “I support Kaep. I’ve always supported Kaep and what he stands for and what he believes in. Obviously, you guys saw the global spot Nike put out where he was the face of it. I was happy to be a part of it.”

LeBron has also voiced his support for Kaepernick in the past as well. Last month, he told ESPN that he backed Nike’s “Just Do It” advertisement which featured Kaepernick. “I stand with Nike, all day, every day.,” James had said then.

.@KingJames weighs in on why he wore a @Kaepernick7 shirt before his game Thursday. pic.twitter.com/O5QDrqn8o6

The quarterback is currently without a NFL franchise, but one of Nike’s biggest stars is clearly standing up for him. LeBron has always voiced his opinions about social and political issues and he is a clear advocate of the motto that athletes should use their brand to tackle such issues.

The Lakers will continue their preseason against the Warriors as the season opener for them is just 10 days away.