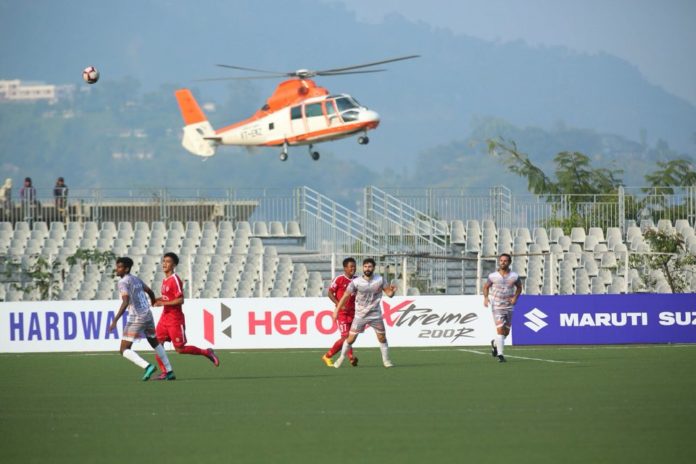 Chennai City continued their undefeated streak in the I-League by overcoming Aizawl FC 2-1 at the Rajiv Gandhi stadium in Aizawl. With this win, the league leaders now have a seven-point lead over their closest rivals East Bengal and Churchill Brothers, albeit playing a game and two more than them respectively. Aizawl FC, on the other hand, still sit on the bottom of the pile, not picking up a single win so far in the season.

The game started on a tepid note with both the sides fumbling at the final third in whatever little opportunities they had created. However, the second half was more lively one as the away side drew first blood four minutes later. Chennai City FC was awarded a free-kick just outside the penalty box, and Sandro Rodriguez made no error in rocketing it in the back of the net like he did against East Bengal in their previous encounter.

The home side pressed hard for the equalizer and finally got one at the 72nd minute when Kromah latched on the rebound after the goalkeeper had saved Dodoz’s initial shot. However, the joy was short lived as Chennai City FC regained the lead four minutes later.

Romario Jesuraj gave an inch-perfect cross from the right wing and Sandro headed it in comfortably. The home side would maintain the slender lead for the remainder of the game as they picked up three consecutive wins on the trot.

The I-League resumes on Sunday where Minerva Punjab would take on Gokulam Kerala at the EMS Stadium in Kozhikode.