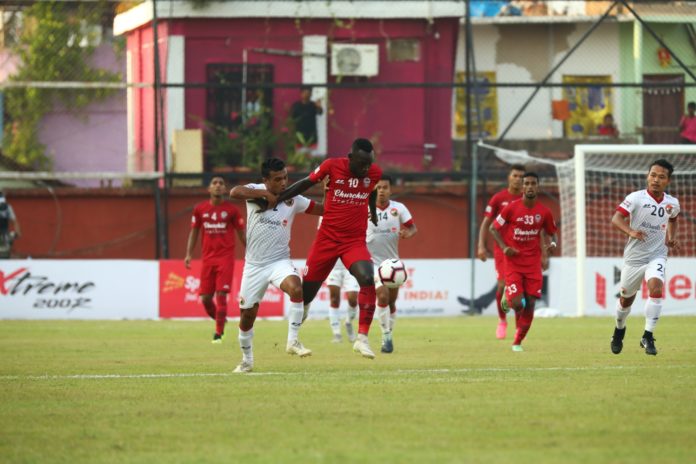 Churchill Brothers SC picked up the first win of the season by obliterating Shillong Lajong 4-2 at the Tilak Maidan Stadium on Thursday. This win takes the Goan side to the third position with 10 points from 6 games, behind East Bengal on goal difference. Shillong Lajong, on the other hand, finds themselves in the 10th position with just win and four losses from five games.

Willis Plaza drew first blood for the home side at the 18th minute itself when he rocketed the ball past the hapless keeper from a Dawda Ceesay cross. Samuel Lalmuanpuia restored the parity for the all-Indian away side twelve minutes later when he latched on to the rebound following Phirangki Buam’s shot.

However, the joy was short-lived as Dawda Ceesay found the back of the net following an assist from Willis Plaza. As both the sides came out from the tunnel, Samuel Kynshi took the Churchill defense by surprise to go past them and slot the ball home.

The Trinidad and Tobago striker again turned into a villain for the away side as he headed home an Israel Gurung free kick at the 51st minute. Three minutes later, he completed his hat-trick by a solo effort.