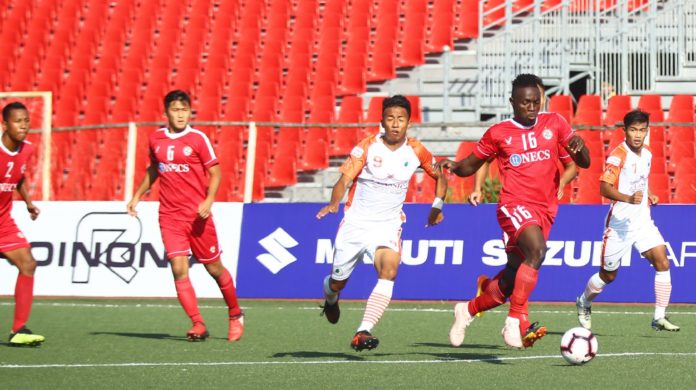 Aizawl FC and NEROCA played out a goalless 0-0 draw at the Rajiv Gandhi Stadium in Aizawl on Wednesday. The game was a tale of two halves as the home side dominated the first half, but the away side looked dangerous in the second.

Aizawl could have broken the deadlock at the 23rd minute when Alfred Jaryan’s volley from Zohmingmawia’s corner was saved by NEROCA custodian Mauro Boerchio. The home side got another opportunity to take the lead when Biaklin Paite brought down Bektur Uulu at the edge of the box. Kareem Nurain stepped up to take the resultant free kick, but his shot sailed away inches above the crossbar.

The away side came out of the tunnel with much more intent and vigor and could have drawn first blood thrice within a span of the opening ten minutes. Other than that, there were no other meaningful attacks in the second half as both the defending teams held their ground firm.

With this draw, Aizawl sit on the ninth position whereas NEROCA sit on the tenth position. Both the teams have 2 points from 3 games but Aizawl eke them out on goal difference.