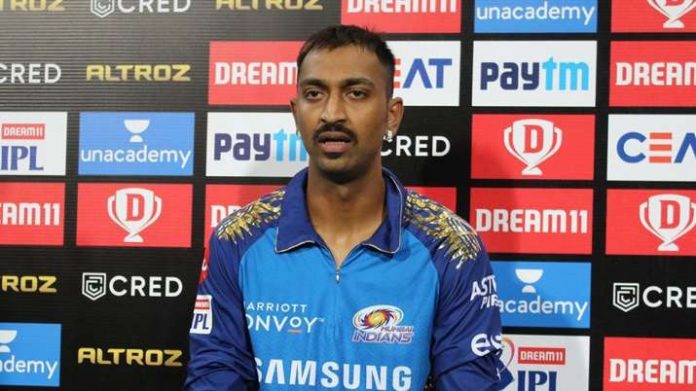 2020 edition of Indian Premier League has just finished with Mumbai Indians winning their fifth IPL title. While most of the Indian players have reached Sydney for their upcoming series against Australia, Mumbai Indians’ all-rounder Krunal Pandya faced an issue while returning home. He has been stopped at Mumbai International Airport by the Directorate of Revenue Intelligence (DRI) due to suspicion of having an undisclosed amount of gold and other valuable things while returning from UAE, where the 13th edition of IPL took place.

“Cricketer Krunal Pandya stopped by Directorate of Revenue Intelligence (DRI) at the Mumbai International Airport over suspicion of being in possession of undisclosed gold and other valuables, while returning from UAE,” DRI sources said.

Cricketer Krunal Pandya stopped by Directorate of Revenue Intelligence (DRI) at the Mumbai International Airport over suspicion of being in possession of undisclosed gold and other valuables, while returning from UAE: DRI sources pic.twitter.com/9Yk82coBgz

Krunal recently played a crucial role for Mumbai Indians in the cash-rich T20 league. The Rohit Sharma-led side won convincingly on Tuesday after beating Delhi Capitals in the finals of the league. Notably, the franchise had earlier won the title in 2013, 2015, 2017, and 2019 as well.

It is also noteworthy that, the all-rounder has so far played 71 matches for Mumbai Indians in the league. He was also the player of the match in the final of 2017 edition of the league and had played a key role for Mumbai Indians to defeat Rising Pune Supergiant to claim their third title as well.

On the other hand, while players were ready to fly, the BCCI tweeted photographs of the Indian team before their departure where the players can be seen in customised PPE kits for travel amid the crunch time of COVID-19 pandemic.

“#TeamIndia is BACK! Let’s embrace the new normal,” the official Twitter handle of the BCCI posted the photo with this caption. However, most of the players of the Indian team were a part of the cash-rich T20 league and after the end of their respective team’s campaign in the tournament, they moved to the bio-bubble made for the national team in the UAE.

Notably, Team India will undergo a 14-day quarantine in Sydney during which they are allowed to train for the upcoming series where they will play three ODIs, three T20s and four Tests starting November 27.