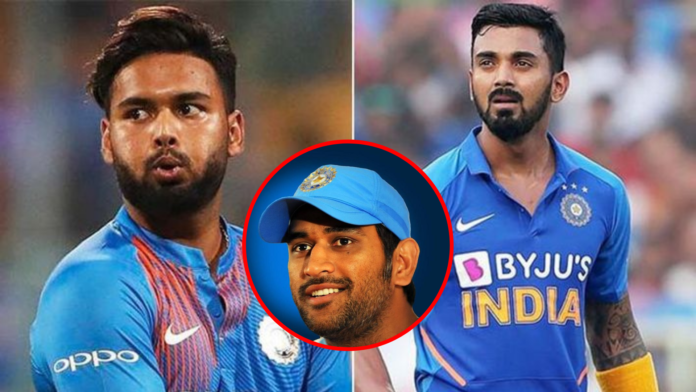 Change is never easy as we are creatures of habit. Before he hung up his gloves, MS Dhoni made sure the nonchalant transition of captaincy to Virat Kohli. However, where India is likely to feel his absence more is behind the wickets.

Dhoni’s lightning-quick glovework and penchant to be the guiding light from behind the stumps is a hard act to follow.

However, his departure will allow KL Rahul and Rishabh Pant the chance to seal their position behind the wickets for good. 22-year-old Rishabh Pant was seen as a natural successor to Dhoni and was groomed to be the heir-apparent by the team management.

In hindsight, his subdued performances with the bat and ordinary glove-work has left the door ajar for a more neutralised wicketkeeper in KL Rahul. The additional responsibility though has only benefitted Rahul, who’s average has jumped from 47 to 70 in space of six months post the 2019 Cricket World Cup.

So the million-dollar question: is the young and dashing Rishabh Pant still the No 1 choice to replace the irreplaceable Dhoni, or has Rahul mounted a serious challenge to his place?

21-year old Rishabh Pant’s talent was never in question. The IPL, which is considered a launchpad for the young talent sees Pant average 37 with an impressive strike rate of 160. Despite multiple opportunities in the senior national setup, the Roorkee-born Pant has failed to make serious inroads.

His inability to gauge situations, converting his starts and most importantly giving away his wicket at times when his team needed him to play sensibly, might end up denting his Test fortunes, despite him having two Test centuries, that too outside India.

One may present his case with his two-Test tons in Australia and England. To make it an event point, he doesn’t have the burden of proving his reputation in the longest and truest format of the game, which perhaps works to his advantage. But if he has to go a mile in that shirt, he must find a way to perform under pressure. After all, the man he’s expected to replace made meals out of pressure situations.

With veteran Wriddhiman Saha warming the bench in the Test arena and with the emergence of KL Rahul as a viable stumper, the onus is well and truly on Rishabh Pant to prove his worth.

The last twelve odd months have been career-defining for KL Rahul. From entrusted to be India’s No 4 in the World Cup to keeping wickets six months later, the lanky Karnataka batsman has seen fortunes change for good.

KL Rahul is no novice to wicketkeeping. He has kept wickets for his home team Karnataka and in the IPL too for Kings XI Punjab. His recent move behind the stumps in series against Australia and New Zealand was necessitated by an injury to Rishabh Pant. However, his impressive performances have raised for calls to anoint Rahul as a permanent wicket-keeper.

The right-handed player himself also admitted that he is enjoying the dual role.

To his credit, the solid batsman has performed well in the longer as well as shorter formats of the game at the top of the order as well batting down the order. In addition, no conditions, no pressure ever seems to affect his gameplay.

In fact, while batting in the middle order he can be as fluent at the top, as he narrated against Australia.

Former wicket-keeping greats Nayan Mongia, Syed Kirmani and former chairman of selectors MSK Prasad, who was also a keeper have all said that competition for places presents a pleasant headache for the skipper and the team management.

Apart from Rishabh Pant, KL Rahul and Wriddhiman Saha, India has the likes of Sanju Samson waiting in the wings to get his chance. Such embarrassment of riches will only do good for Indian cricket, as competition can often bring the best out of a player.

But can cricket be all about stats and numbers? Certainly not. If that was the case then Wasim Jaffer would’ve made the opening spot in the Test team his own with 20,000 first-class runs to his name.

There are a lot of situations, where a player’s game-sense, ability to adapt and mentality are put to test apart from their natural talent. Both KL Rahul and Rishabh Pant have seen a lot in the past couple of seasons. While Rahul has successfully pulled off everything possible, Pant’s career graph has gone in the inverse direction.

Is another Rahul set to assume the duties behind the wickets for the sake of the team? Only time will tell.

Both KL Rahul and Rishabh Pant will show their batting prowess in the upcoming IPL season and the wagers for the IPL match can be placed here.