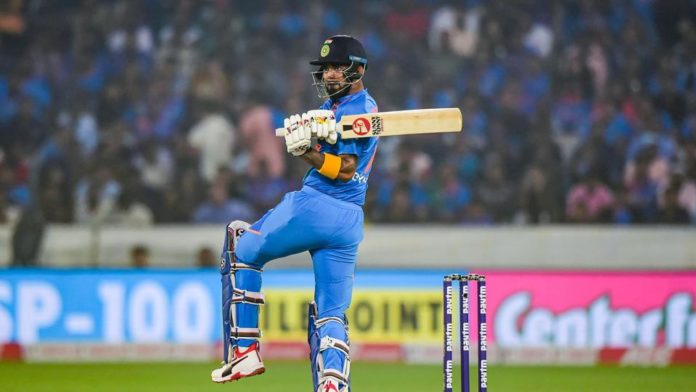 Following his superb form in the 2-0 series victory over Sri Lanka, KL Rahul retained his position in this year’s first ICC Men’s T20I Player Rankings. In the recently concluded 3-match T20I series, Rahul scored 95 runs in two games after he was chosen as India’s first choice opener as Rohit Sharma was rested. Rahul, who is the highest-ranked Indian batsman in the list, earned 26 points and now stands at 760 points, behind fifth-placed Australia’s Glenn Maxwell.

Shikhar Dhawan, who made a comeback after his elbow injury, looked out of form in the 2nd T20I at Indore, managed to score 52 from 36 balls in the final game in Pune, jumped one place up and now stands at the 15th position in the rankings. Skipper Virat Kohli, the top-rated batsman in Tests and ODIs, also moved up one place higher and booked the 9th spot in the recently updated list. Meanwhile, middle-order batsman Manish Pandey climbed up four places and stands at 70th position.

The India and England skippers have moved one place up in the @MRFWorldwide ICC T20I Rankings for batting!

India’s young fast-bowling brigade on the other hand, made massive improvements in the ICC Men’s T20I Player Rankings for Bowlers. The man of the series, Navdeep Saini from Delhi picked up 5 wickets in the series and leaped 48 places uphill taking his rank from 146 to 98th spot. Saini’s colleague, pacer Shardul Thakur, who scalped 5 wickets in the series while also contributing with the bat (a fantastic cameo of 22 in only 8 deliveries) in Pune, re-entered the top 100 – claiming the 92nd position.

‘Yorker King’ Jaspreet Bumrah, who also made his comeback in the team, after recovering from a lower-back fracture, climbed up the rankings ladder by eight places and is now at the 39th position.

The victory also saw the Men in Blues gain two points in the ICC Men’s Team Rankings. However, India remain in the fifth position with 260 points, while their southern neighbours lost two points and now stands at 236, equal to that of Afghanistan.