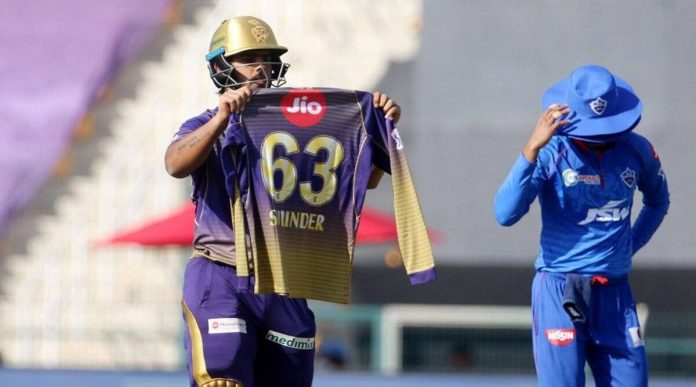 Nitish Rana, the Kolkata Knight Riders (KKR) all-rounder played an excellent inning against Delhi Capitals(DC). He scored a brilliant half-century and did something that his very heart-touching.

Nitish Rana scored an extraordinary knock of 81 runs off 53 deliveries against Delhi Capitals at Sheikh Zayed Stadium in Abu Dhabi on Saturday afternoon. He hit thirteen fours and a maximum.

He completed his tenth half-century in 35 balls. Upon reaching the 50-runs mark, he paid tribute to his father-in-law who passed away due to cancer on Friday. He showed a KKR jersey with No. 63 and ‘Surinder'(name of his father-in-law) written on it.

The official Twitter handle of IPL also acknowledged the gesture as they wrote:

“Sent in to open the innings, @NitishRana_27 responds with a fine 50 and dedicates it to his father in law, who passed away yesterday.”

Sent in to open the innings, @NitishRana_27 responds with a fine 5️⃣0️⃣ and dedicates it to his father in law, who passed away yesterday.#Dream11IPL pic.twitter.com/1LUINkpqpe

Saturday’s match saw Rana come out on the pitch to open for KKR. But the team was stunned by the bowlers of DC. They lost wickets in the early stage. Shubman Gill scored nine runs and was dismissed by Anrich Nortje after caught out by Axar Patel in the second over.

Rahul Tripathi and former skipper, Dinesh Karthik were also sent to the pavilion very easily. KKR were struggling with the batting and at one stage they were 42/3 in the eighth over. The DC bowlers were putting pressure on the batters.

In came Sunil Narine at No. 5 in the batting line-up. He joined hands with Rana and made a turnaround for his team. They built-up a much-needed partnership and were able to put 115 runs on the board.

Both men went past the 50-run mark after a terrific showcase of batting performance. Marcus Stoinis made the dismissal of Rana at the brink of the first innings while, Kagiso Rabada sent Sunil Narine back to pavilion ahead of him.

KKR scored 150 runs in the final 12 overs, of which 33 runs came in the final three overs. After a brilliant comeback in the match, they managed to score a total of 194 runs at the expense of six wickets.