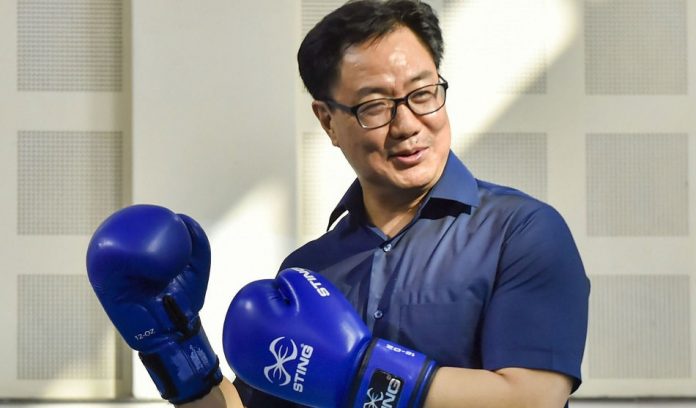 Much like a potter with a wheel and clay, Mr Kiren Rijiju created and defined the framework and the shape of Indian sports in the last two years. The latest government cabinet reshuffle takes him into the world of law and justice, but his impressions will always be left in the world of Indian sports much like the marks left on the field by the athletes.

Despite a population of over a billion, and brimming with talent, India is arguably not a focal point in the sporting world, to say the least. The frailties are quite visible in the major International ventures and it always seems a case of “can do much better”.

Mr. Kiren Rijiju took the mantel over from Rajyavardhan Singh Rathore in the second consecutive run of the Modi government.

“For me ‘leadership is not about power and privilege, it is about responsibility’,”

Back then, India were still healing from the wounds from the 2016 Olympics with a sight set on the next one.

The nation barely escaped from coming back empty-handed much like their 1992 Barcelona campaign. With only a silver and a bronze medal, 2016 served as an overall disappointment as the usually reliable shooters and wrestlers also came back empty-handed.

While the former shooter laid down the foundation for a brighter future, work was far from done when Mr Rijiju took over. The Delhi University graduate took over as the Union Minister of State for AYUSH, Youth Affairs and Sports (Independent Charge). MoS Minority Affairs. on May 30, 2019.

What followed was an influx into the sporting world that the nation had never experienced before outside the frame of cricket and hockey.

Being an ardent believer in fitness and aligning towards sports, Mr Rijiju’s plain love towards the world of sports made a great deal of impact as well.

The genuine care for sports echoed throughout his reign through his numerous ventures, incentives for athletes, and even through his social media activity. It was clear as daylight, that the prosperity of the nation in the global sporting map was the primary aim.

We were the Kings and we have the spirit to become Kings again!
As our formidable Indian Hockey team prepares to regain it's lost glory at Olympics #Tokyo2020
Let's unitedly support and encourage them from India! #Cheer4India pic.twitter.com/bERFViBKG1

He had the Indian athletes under the microscope personally, in a good way. Tracking their progress, chiming in with help was all routine in the historic Rijiju era.

The 49-year-old assumed the office, arguably, in the hardest of times for the athletes and sporting structure of India.

The coronavirus pandemic took a hard hit on sports, and the Indian sports system was also expected to crumble as well due to the pressure. With the athletes not being able to showcase their talents due to the suspension of events, uncertainty loomed over the scene. Moreover, with the training facilities closed as well, the honing of skills was also a novelty and privilege during the tough times.

Day by day, it was up to Mr Rijiju and his team to set off the fires and to make matters worse, the fires were on a consistent basis setting off the alarms. The requests ranged from financial help, to understaffing, to facility issues, and the list did not have an early end. But slowly and steadily the issues have died down and the priority still remains a bagful of medals from Tokyo.

While the way the overall situation in the pandemic was dealt with is nothing short of a crown jewel, but the actual physical forms of jewels came through the athletes who brought the glory home.

From India’s 312 medal tally at the South Asian Games, to individual accolades in independent sports tournaments, a lot of athletes did the nation proud- and they were not left unrewarded.

Incentives were galore during Mr Rijiju’s stint which was backed up by the increase in the sports budget as well.

“The prize money for the Sports Awards was last reviewed in 2008. These amounts should be reviewed once every 10 years at least. If professionals in every field have seen an enhancement in their earnings, why not our sportspersons?”

In his reign, the government allocated Rs 2826.92 crore to the sports budget, which is a Rs 50 Crore increase from the previous one. Moreover, an additional Rs 291.42 was provided solely for the Khelo India Program.

Like incentives, initiatives also made their mark and conceivably, illuminated Mr Rijiju’s time in the office. Fit India Movement was a movement launched by the minister that sparked a wide interest in fitness throughout the country. Apart from this, he also served as a catalyst to truly ignite the Khelo India Program, through its expansion and maximizing the potential of the Target Olympics Podium Scheme (TOPS)

While it seems cruel that Mr Rijiju won’t be overseeing the Olympic contingent who are only two weeks away from representing their nation, any glory from the event should be credited to the man, who made it possible with his vision and hard work. The current batch of Olympians will unanimously have their respect for Rijiju as they fly for their most important assignment.

I feel India should do better than previous editions. In fact, we will be sending our largest contingent to Tokyo.”

It is safe to say that the successor Anurag Thakur will have huge shoes to fill following the end of Rijiju’s reign in the office. His unparalleled love for sports and his ability to take athletes under his wing with a personal touch makes him unique in a way, and will for sure be a big absence for Indian sports, as it heads into a new era envisioned by Rijiju himself.