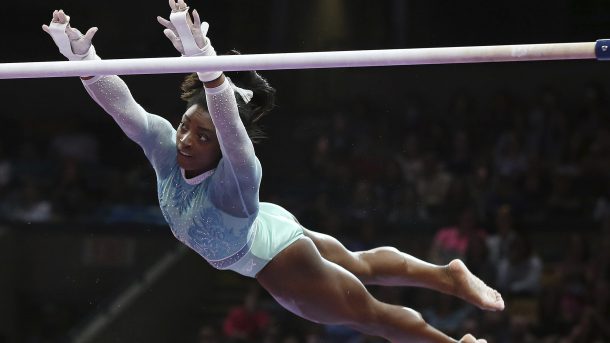 Notable American gymnast Simone Biles has been admitted to a hospital with a kidney stone 24 hours before she represents her country in the World Gymnastics Championships in Doha. However, the four-time Olympic gold medallist isn’t backing out of the Worlds and intends to participate in it.

She announced the same on her Twitter account by posting a photo of her smiling in the hospital bed with the caption, “Nothing like a late night ER visit less than 24 hrs before world championships. This kidney stone can wait, doing it for my team. I’ll be gucci girls!”

this kidney stone can wait…. 👊🏾 doing it for my team! ❤️ I’ll be gucci girls ! pic.twitter.com/rKkvuEQrKc

The rumors were rife that she was admitted to a hospital and would give the World Championships a miss. It only proved to be half-true as the 21-year-old made it clear that she would be taking part in the competition.

Simone Biles won gold in the team, all-round, vault, and floor exercise events in the Rio 2016 games and accompanied it with a bronze in the balance beam event.

Hailed as the greatest gymnast of the modern era, she even has a skill to her name in the ‘Floor Exercise’ event with a G level difficulty. It was incorporated into the Code of Points at the 2013 World Championships when she was only 16.

The Sportsindiashow team salutes Simone’s courage and determination and wishes her a speedy recovery.