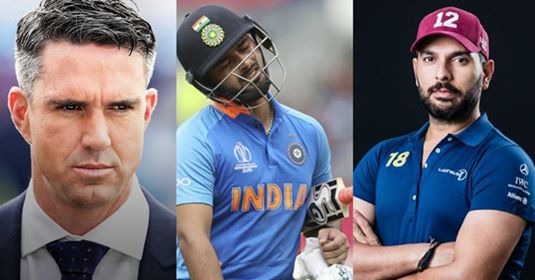 Rishabh Pant, on Wednesday, failed yet again in making an impact with his bat. Originally not a part of the Indian World Cup squad he replaced an injured Shikhar Dhawan. Pant played at no.4 in the Indian team. However, he failed to make an impact throughout the tournament. In the semi-finals as well, he just threw his wicket away after scoring 32 runs. Pant looked set to score big. However, he decided to slog sweep a ball off Santner and ended up giving a simple catch at deep mid-wicket.

With the team under tremendous pressure, this shot from Pant drew a lot of flak. One of the many critics was former England batsman Kevin Pietersen. He tweeted, “How many times have we seen (Rishabh Pant) do that? The very reason he wasn’t picked initially! Pathetic!”

The Man of the tournament from the 2011 World Cup came to Pant’s rescue. He replied to this tweet saying Pant is still new to this business and is learning.

He’s played 8 Odis ! It’s not his fault he will learn and get better it’s not pathetic at all ! However we all are entitled to share our opinions 👍

This conversation had just started. Pietersen replied to Yuvi saying “Criticism comes out of sheer frustration.” He further added that he hoped that Pant learned fast.

My criticism comes out of frustration because of how good he is, mate. He does it sooooo many times! Let’s hope he learns FAST!

This tweet seemed satisfactory to Yuvraj Singh. He ended this conversation on Twitter by simply saying that he agreed to Pietersen.

After the match, even the Indian skipper Virat Kohli had said that Pant failed in selecting the correct shot. However, he was quick to add that he believes that the youngster will learn from his mistakes.

“He (Pant) is an instinctive player and he did well to overcome that situation and stitch a partnership with Hardik. I made many errors when I was young in my career and he too will learn. He will look back and think yes, he could have chosen a different option in that situation and he realises that already,” Kohli said.

Read why Indian pacer Mohammed Shami feels ‘being a hero has...

Rishabh Pant to miss 2nd ODI against Australia after concussion

One of India’s fastest bowlers wants to make a comeback into...