The Golden State Warriors are getting a new arena for next season, and Kevin Durant knows all about it. The Chase Centre in downtown San Francisco will host the Warriors games next season, and Durant has kept an eye on proceedings. 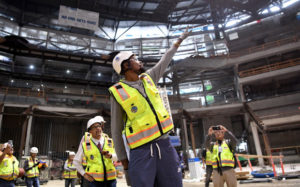 He helped the local media on a tour of the arena, which is still under construction. Everyone had to wear protective gear which included hard hats, and it was nice to see the lanky forward in a different environment.

KD getting a lot of love from Chase Center workers. They told him he’s the first player to be on what will be on the floor in the new facility. “I can see a lot of points being scored here,” he says. pic.twitter.com/9hyJU3aG9L

The workers liked his visit as well, and they told him that he’s the first player to be on what will be on the floor in the new facility. “I can see a lot of points being scored here,” Durant told the reporters at the construction site.“My imagination is going wild right now with possibilities.”

Durant is yet to commit his long-term future in Oakland, and he will become a free agent in 2019 along with teammate Klay Thompson. The new arena will certainly help the Warriors’ pitch, and so will the improved financial terms of the contract.

The arena will be used for numerous other purposes as well, and it is sure to be a splendid one. Hopefully, for Durant and the Warriors, more Championships will follow there.