The Golden State Warriors will take on the Sacramento Kings in Seattle on Saturday and Kevin Durant will return to the city where he began his NBA career.

The Warriors forward strongly thinks that Seattle deserves a spot on the NBA map. The Seattle Supersonics were relocated in 2008 and became the Oklahoma City Thunder after just one season for KD in the city. 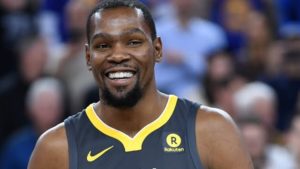 “It’s a basketball city. It’s a sports town,” he told ESPN. “They have a good representation of basketball in the NBA from Seattle-born players, Washington state-born players, and I feel like that whole brand deserves an NBA team.

“Just like the Golden State Warriors deserve a team or the Los Angeles Lakers deserve a team, Seattle is that same way. (A team) has that same type of impact in the community. So (we have) a lot of time in life before this whole thing is over, and I’m sure we’ll see a team before it’s time.”

Coach Steve Kerr also echoed his star’s thoughts, and said that the NBA being in Seattle should be a ‘no brainer.’

However, for the move to become a reality, one of relocation or expansion is needed. Currently, no such plans are close to happening, so KD’s wish won’t bear fruition in the near future. But Seattle will arguably be one of the top contenders to get a team if the need arises.