On Sunday the 16th of August, Kevin De Bruyne has been named PFA Player of the
Year in the Premier League. The winner is chosen by the captains of the 20 Premier
League clubs together with an expert panel. In addition, supporters could also vote.

The Manchester City star player enjoyed one of his best seasons yet at the Etihad,
scoring 13 Premier League goals, and equaling the record of Thierry Henry for
providing 20 assists in a season. De Bruyne, who won City’s Player of the Year vote too, beat competition from Jordan Henderson, Trent Alexander-Arnold, Sadio Mane, and
Jamie Vardy and others.

Man City won two prizes this season, the FA Community Shield and the EFL cup,
finishing the league in second place, loosing in the semi-finals of the FA Cup against
Arsenal, and surprisingly being kicked out of the Champions League quarter finals by
Ligue 1 team Olympique Lyon. 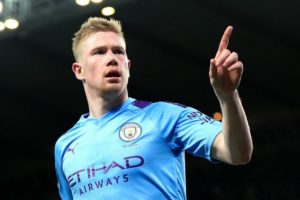 De Bruyne is only the second Manchester City player to win this Premier League
award, with Vincent Kompany winning it in 2011/12. He is also only the third Belgian
player to be named PFA Player of the Year after Eden Hazard picked up the prize in
2015.

Six-time Premier League champion, Rio Ferdinand, thinks the central midfielder was
the only right choice to be winning the prize saying the following about the Belgian:

“Without a doubt, he’s been the standout player this season, and he’s one of best
players in world football. He sees passes that nobody else can and then delivers them week-in, week-out, as well as scoring some sensational goals. It’s a privilege to watch him in the Premier League.”

Liverpool’s Alexander-Arnold was named Young Player of the Season, while Liverpool
manager Jurgen Klopp won the award for Premier League Manager of the Season.
Klopp was competing with Frank Lampard, Chris Wilder and Brendan Rodgers to win
the award.