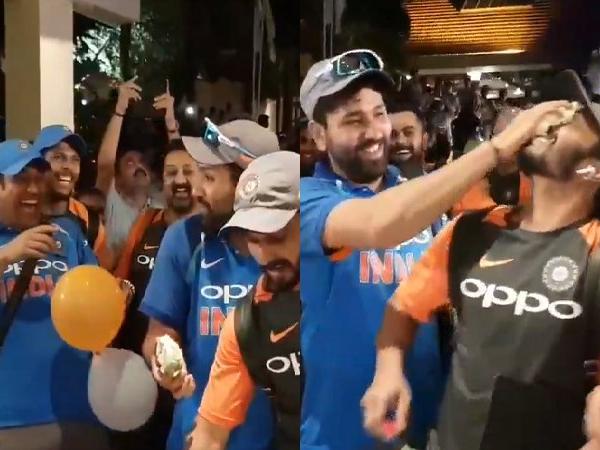 On Thursday, India defeated West Indies by nine-wickets in the fifth and the final One-Day International (ODI) in Thiruvananthapuram at the Greenfield Stadium to seal the five-match series 3-1. Post their emphatic win, India were greeted at the team hotel with a celebratory cake and as Rohit Sharma proceeded to cut the cake MS Dhoni pranked Rohit and burst a balloon near his ears.  Kedar Jhadav became the victim this time around as vice-captain Rohit covered his face with cake after cutting it.

Back at the team hotel after an early wrap and it is time to celebrate.🏆 #TeamIndia #INDvWI pic.twitter.com/qW7mtAoXgq

West Indies won the toss and elected to bat. Left-arm spinner Ravindra Jadeja took four wickets to help India bundle out the West Indies for 104 in just 31.5 overs. Pacers Khaleel Ahmed and Jasprit Bumrah chipped in with two wickets each. Jason Holder top-scored for the visitors with 25, while 8 of the 11 players failed to get into double digits and three players failed to even get off the mark. Team India took only 14.5 overs to reach the target, courtesy an unbeaten 99-run stand between Rohit Sharma (62 off 54) and captain Virat Kohli (33 off 29).

Virat Kohli became the first Indian Captain to win six consecutive ODI series at home as India registered their sixth straight bilateral series win against the Windies at home. Jadeja was named man of the match for his impressive figures of 4-34 from his 9.5 overs. While skipper Virat Kohli was adjudged man of the series for his 453 runs in five matches including three centuries and a highest score of 157 not out.