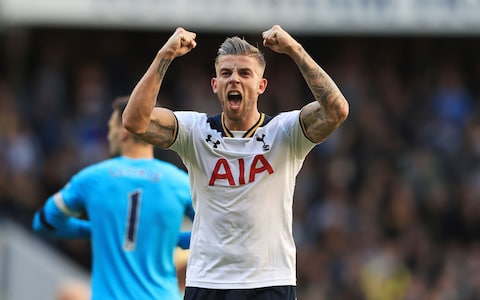 Jose Mourinho has been ‘given the go-ahead to sign Toby Alderweireld’ as he looks to secure a top-class centre back for Manchester United‘s leaky defence. Tottenham Hotspur star Toby Alderweireld is one of the best defenders in the Premier League. In fact, the Belgium international could be the best centre-back in the English top flight. The 27-year-old has been in brilliant form for Spurs so far this season and has been a rock at the back for the North London outfit.

According to The Sun, the Portuguese boss arranged January transfer targets in a recent meeting with Ed Woodward, the club’s executive vice chairman, as well as his agent Jorge Mendes.

Tottenham defender Alderweireld, who was heavily linked with a move to Old Trafford in the summer after he failed to agree terms over a contract extension at the north London side, is the priority. Mourinho was keen to bring in a new defender but the switch from the capital to Manchester never materialised.

Alderweireld’s current deal is set to expire at the end of the season, but Tottenham retain the right to extend it by another year. However, that will activate a £25million release clause. The Belgium international has made 19 appearances for Mauricio Pochettino’s side this campaign.

United are currently sixth in the Premier League table, 16 points off leaders Liverpool.  Mourinho’s side have conceded 26 goals in 16 matches and have kept just two clean sheets in the top flight – in the 2-0 win at Burnley and the goalless home draw with Crystal Palace.

Injuries to defensive personnel haven’t helped. Phil Jones became the latest defender on the treatment table last week, joining Victor Lindelof, Antonio Valencia and Luke Shaw. Marcos Rojo is only just back from a knee injury that ruled him out of the opening months of the campaign, while Chris Smalling is suffering from the after-effects of a fractured foot.