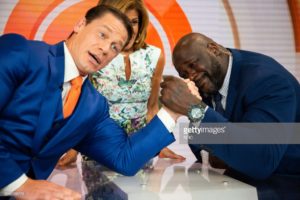 John Cena was the Centre of Attraction this week on the latest edition of The Today Show. The 16-time WWE World Champion took time out of his busy schedule primarily to promote his new children’s book, Elbow Grease.

Cena was joined by four-time NBA Champion and Basketball Hall of Famer, Shaquille O’Neal. Firstly, The Champ presented Shaq with a pocket-sized version of his book before the duo were put in an arm wrestling battle and the outcome ended up being a stalemate.

Meanwhile, Cena also responded to questions about his new hairstyle and revealed that he was growing his hair out for his upcoming movie, ‘Project X‘ that he is currently filming in China.

The 41 year old is scheduled to remain in South Asia for the next couple of months but will return at WWE Crown Jewel in Riyadh, Saudi Arabia on November 2. Cena will compete in the eight-man World Cup Tournament after he was given a direct entry into the match this past Monday on RAW.

Here’s a look at John Cena’s brief appearance on The Today Show: