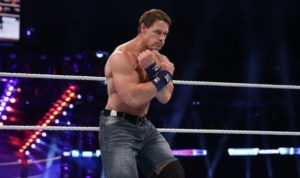 John Cena returned to reality TV for the second consecutive day as he made a special appearance on ‘The Tonight Show Starring Jimmy Fallon’ earlier this week after the promotion of his new children’s book on ‘The Today Show’ this Tuesday.

Firstly, Cena received praise from host Jimmy Fallon for his new hairstyle. The duo talked about the WWE Superstar’s latest movie, ‘Project X’, that he has been filming in China for the last couple of months.

Cena revealed that his co-star, Jackie Chan taught him a new finishing manoeuvre, ‘The Sixth Move of Doom.’ The Champ immediately took the help of his Fallon to demonstrate his signature move to the live audience before knocking him out.

Here’s a look at the video:

The 16-time WWE World Champion debuted his new finisher on live TV for the first time this past Saturday at WWE Super Show Down in Melbourne, Australia. Cena’s lightning fist strike knocked out Elias in the middle of the ring for the pinfall and grabbed the win for his team.