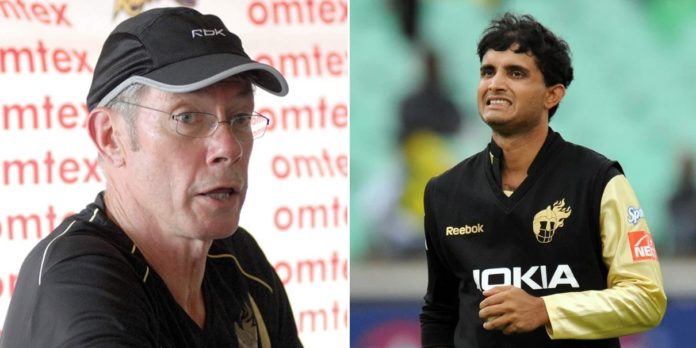 Former India captain Sourav Ganguly was one of the best players in his time – be it for Tests and ODIs. He was one of the most successful captains of Indian team too. In the inaugural edition of IPL in 2008, Kolkata Knight Riders (KKR) appointed him as the captain of the team. But Ganguly had a not-so-successful career in IPL.

Under his captaincy, KKR finished at the 6th place in the inaugural edition of the cash-rich league. The result witnessed a split captaincy between Ganguly and Brendon McCullum by the coach John Buchanan in 2009. However, Ganguly once again struggled with the bat and KKR failed to do well again in the 2nd season too.

In a recent interview with Sportstar, Buchanan revealed that Sourav Ganguly was never suited for the T20 format.

“My thinking at the time was, as a captain, you needed to be able to make quick decisions and your game needed to be suited to the shorter format, and that’s why I had those conversations with Sourav,” Buchanan said.

“I just couldn’t believe he was suited to the format of the game and certainly not in a formal captaincy role,” the former Australia coach further added. “I think it’s too much for one person to actually understand all the set of plays that you need to put in place, all the various decisions you need to make, reasonably quickly. And really where it was going to was to have everybody as a leader.”

“In other words, you are saying split captaincy, but you want everybody to be a leader on the field. These days all the bowlers are in charge of every delivery that they make. All batters make decisions out there without necessarily the inputs of the captain and the coaches. I think that is where the strength of the team lies,” he again said.

The 13th edition of Indian Premier League will begin from September 19th and the final will be played on November 10th. The 53-day tournament will take place in UAE instead of India, keeping the rise of COVID-10 cases in mind.