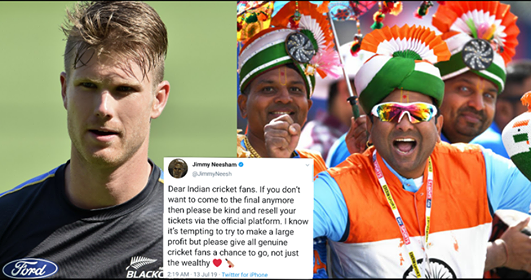 New Zealand all-rounder Jimmy Neesham has urged all the Indian fans to re-sell their tickets of the World Cup final. This request from Neesham came after New Zealand managed to defeat India in the semi-finals. Indian fans had bought the tickets to the finals in large numbers. However, post their exit, Neesham wants the Indian fans to be ‘kind’ and give a chance to other genuine fans.

Neesham asked the fans who to re-sell their tickets on the official platform of ICC.

Dear Indian cricket fans. If you don’t want to come to the final anymore then please be kind and resell your tickets via the official platform. I know it’s tempting to try to make a large profit but please give all genuine cricket fans a chance to go, not just the wealthy ❤️ 🏏

Jimmy Neesham has been pretty good for New Zealand in this World Cup, contributing with both bat and ball. However, in the semi-final against India, he could manage only 12 runs and a wicket.

New Zealand has surprised everyone with their performance in this World Cup. They were not in the list of favourites to be winning the trophy. However, now they find themselves in the finals, against the hosts. They would surely be backing themselves to win it. However, it is not going to be an easy final to this World Cup for sure.