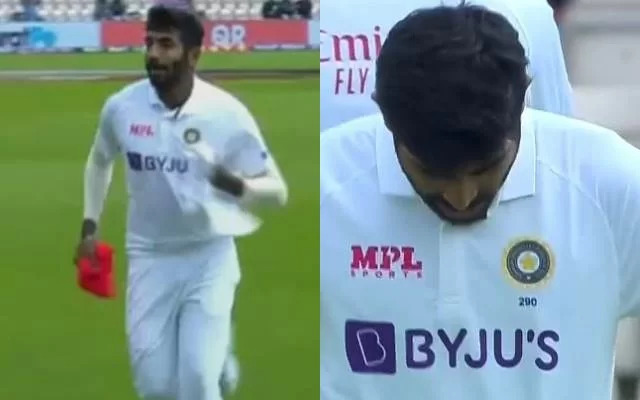 Jasprit Bumrah, one unit of India’s three pronged pace unit did not have the best out outings with the ball on Day 3. However, his impressive late burst rewarded him with a start on Day 5 against Kane Williamson and Ross Taylor. While he started with a tight maiden, the only problem was in the fact that Bumrah was wearing the wrong jersey.

The pacer was criticized for dropping his length which made the Kiwi batsman negotiate the proceedings easier. Bumrah was the most expensive bowler on show prior to action on Day 5.

While Bumrah appeared to stick with the same formula with the initial deliveries, a series of fuller balls to conclude the over, saw the effect on Kane Williamson as he edged one and missed one.

Bumrah had to bowl the entire first over with the wrong jersey. He was seen wearing the jersey which sports the logo right in the middle while India are assigned to wear a special kit designed for the WTC Final which has the nation’s name in the middle as well as the competition’s logo on the chest. In this limited jersey for the final, instead of the torso region, the sponsors are rather shown on the sleeve.

The bowler had to rush to the dressing room in between overs to rectify the situation and return back with the correct jersey.

While the bowling has considerably improved, the Blackcaps are forging a solid resistance in the form of the experienced duo of Kane Williamson and Ross Taylor. New Zealand are currently at 117-2 after 62 overs.

Jasprit Bumrah has pushed his length up, but the change is yet to be rewarded as he enters his 16th over of the match.