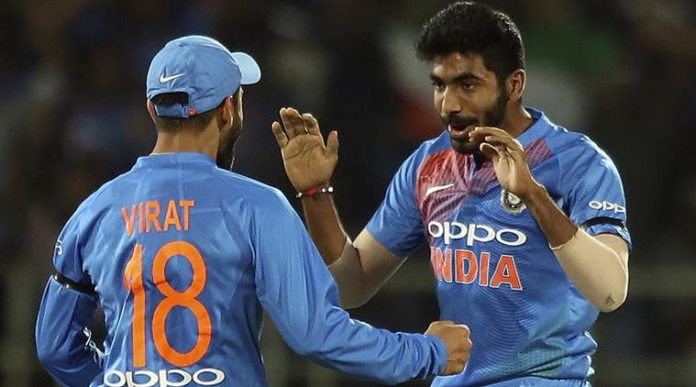 Team India star seamer Jasprit Bumrah  is on the verge  of eclipsing Ravichadnran Ahswin’s record of 50 wickets and becoming the highest wicket-taker in T20Is for India. Bumrah was superb in the first T20I against Australia in Visakhapatnam on Sunday. The right-arm pacer kept India in the match, till the last over, after bowling a brilliant spell of 3/16. Despite India’s last-ball loss in the tie, Bumrah was the standout performer.

The 25-year-old  bowled a magnificent penultimate over as he conceded only two runs, besides taking two wickets.  Albeit, Umesh Yadav failed to defend 14 runs in the final as Australia edged out India by three wickets to take a 1-0 lead in the two-match series.

His match performance saw him get to 51 wickets in T20Is.  He became only the second Indian to take 50-plus wickets in T20Is after R Ashwin (52). Bumrah needs two wickets to surpass the off-spinner and become the leading wicket-taker for India.

After the game, Kohli heaped immense praise on the pacer in the post-match presentation. He said: “Bumrah can do wonders with the ball when it is reversing and did exceptionally well to get us in the game.”

India will face Australia in the second and final T20I on Wednesday at the M. Chinnaswamy Stadium, Bengaluru and Bumrah will have opportunity to overtake Ashwin and become the leading wicket-taker for India in T20Is