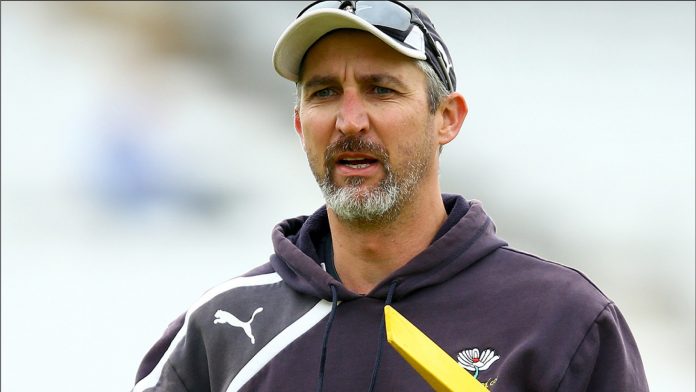 The Board of Control for Cricket in India have announced the squad for the upcoming Australia series where Rohit Sharma and Ishant Sharma have been excluded owing to injuries. And, Jason Gillespie believes the absence of Indian speedster Ishant Sharma will make a huge difference in the series which is scheduled to play in December.

“I am predicting Australia to edge out India in this series,” said the former Australia fast bowler in an interview, who has played 259 wickets in Tests and 142 in ODIs. “I think home advantage is going to be a factor. Besides, it will be a blow with both Ishant Sharma and Bhuvneshwar Kumar injured. Bumrah and Shami have been bowling well for India. But, India will miss Ishant for his experience in Australian conditions.”

Ishant Sharma, who has played 97 Tests so far, has not been added in India’s Test squad which will take on Australia because he has been recovering from an abdominal muscle tear that he sustained in the ongoing season Indian Premier League while playing for Delhi Capitals and that ruled him out of the tournament as well.

However, the injury of Ishant Sharma has been monitoring by the Indian board’s medical team but the quarantine rules and regulations might rule him out of the four-match Test series which is slated to begin on December 17 even if he recovers from the injury. Notably, Ishant Sharma was a key player in India’s first Test series win in Australia in 2018-19 where he claimed 11 wickets in 3 Tests which came at an average of 24.

“He has been bowling beautifully in the last few years. You only have to look at his results to show why he has performed so well,” said Gillespie. “He also brings a subtle difference to the bowling attack. It’s not often that a right-arm seam bowler comes wide of the crease and bowls inswingers to right-hand batsmen and across left-handers. It’s not a common angle for batsmen to face. You normally have right-arm bowlers looking to get close to the stumps and look to swing it away from the right-handers and bowl it in to left-hander.”

Gillespie further added, “When I look at the Australian bowling line up: Mitchell Starc, Pat Cummins and Josh Hazlewood – it is the best seam attack Australia has ever produced in the history of Test cricket. They make a wonderful combination. Obviously with Nathan Lyon, our best off-spinner, it is a pretty formidable line up an

d it’s going to be a real challenge for India in Australian conditions.”

Meanwhile, Australia have a strong pace attack which comprised of Starc-Cummins-Hazlewood. They have so far claimed 582 Test scalps between them. But the trio failed to restrict India from creating history in 2018-19 as Australia had played without their two batting pillars – Steve Smith and David Warner who were banned from international cricket for their involvement in the infamous ball-tampering scandal. However, they both will play this year.

“For the Indian seam attack, the real challenge is how quickly they can adapt to Australian conditions and get their length on the delivery right. Sometimes, when teams come from the sub-continent, it takes a little while to find the correct length. The Australians do it year in, year out,” shared Gillespie.

“I know Australian fast bowlers are going to bowl that fuller length, and challenge the front-foot defence of the Indian batsmen. With India having a powerful batting line-up, it’s going to be an exciting series. Everyone is looking forward to seeing these two giants do battle, in what has been a challenging year for everyone,” he concluded.