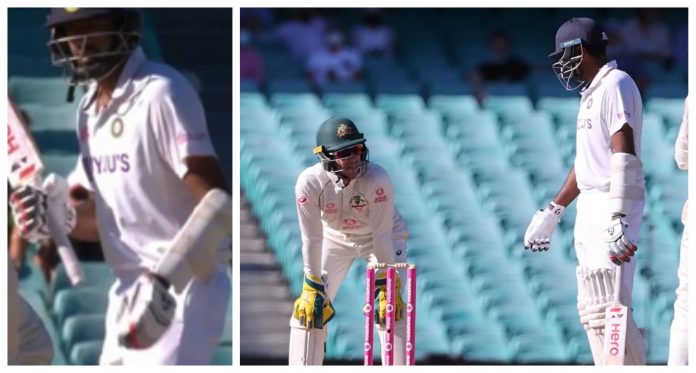 Team India defied all odds to draw the third test in Sydney. Heroics from Rishabh Pant, Cheteshwar Pujara, Ravichandran Ashwin and Hanuma Vihari set up a famous outing which scripted history. The tedious effort came with more troubles with the mind-numbing chatter behind the stumps. Ravichandran Ashwin was not the one to just take it all in as he responded with a sledge of his own.

Australia were left frustrated with the budding partnership between Ashwin and Vihari. The hosts got a window open with the much-needed wicket of Pujara, but were met with sheer resistance even after then.

The off-spinner endured a rough time early on as the pace attacked unleashed a series of bouncers. Copping several blows, Ashwin stood tall to achieve the task at hand.

With the partnership showing no signs of ending, Paine engaged in some chatter and was initially frustrated with Ashwin as he pulled out off Nathan Lyon’s delivery at the last moment. The skipper was heard yelling stating how ridiculous the time-wasting tactic employed was.

He moved on to sledge him by saying that he looks forward to facing him at The Gabba, the venue for the fourth and the final test of the Border-Gavaskar series.

In reply, Ashwin chimed that he also looks forward to facing Tim Paine in India, in what would be the skipper’s last series.

Paine: Can’t wait to get you to the Gabba, Ash

Ashwin: Can’t wait to get you to India, it’ll be your last series

Paine; Can't wait to get you to the Gabba, Ash

Ashwin; Can't wait to get you to India, it'll be your last seried pic.twitter.com/x9q1VNyC6N

India showed exemplary resilience to dig out a draw by playing out the entire final day with the loss of just three wickets. Following the end of the five-day encounter, Ashwin revealed that he rates this knock much like his four test hundreds.

“Touring Australia is never easy so Vihari can be proud of himself. It was a knock equal to scoring a hundred. I was just telling the batting coach during the lunch break that I have never left the SCG without a fifty, this is a venue where I have done well with the bat and today’s innings is right up there,” he said