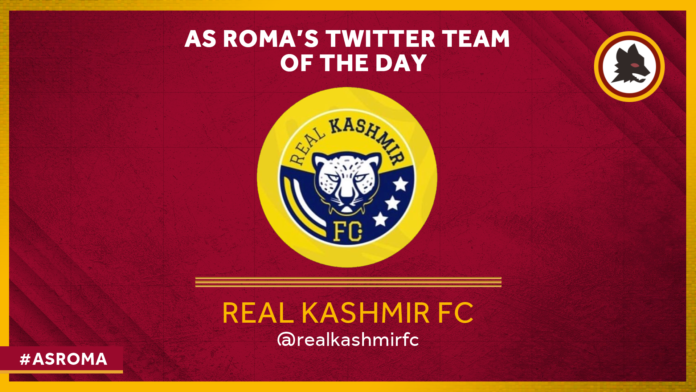 AS Roma’s Twitter handle named Real Kashmir FC as the ‘Team Of The Day’. The appreciation from the Italian Giants will certainly help Real Kashmir FC to achieve a new feat in the upcoming days. Real Kashmir FC started off their campaign in the I League with a great manner. They were victorious against the title holders Minerva Punjab FC in their opening match in the I League. In the next match they were held by Churchill Brothers; but they are still unbeaten in this season’s I League. 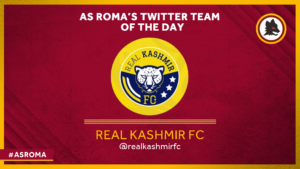 Real Kashmir FC was formed after the devastating flood in the Kashmir valley in 2014. In three years it is quite a remarkable achievement for Real Kashmir FC to make it to the first division of the I League. Their home matches are going to be played in Srinagar and it will be a tough ask for the away teams to snatch a win against them.

AS Roma give a shout out to this achievement of Real Kashmir FC in their Twitter handle.

Our #ASRoma Team of the Day is @realkashmirfc, a small club created to bring hope to a local population devastated by the 2014 Kashmir Valley floods. In only 3 years, they’ve made it to the I-League & beaten the current champions in their opening game. A real football fairytale! pic.twitter.com/RWA5a1v9PU

The official Twitter handle of Hero I League also retweeted the tweet of AS Roma to thank them to recognize the fairytale of Real Kashmir FC.

The beautiful game of Football brings everyone closer and @ASRomaEN proves it once again. The fairytale journey of @realkashmirfc is indeed worth sharing and we can't thank you enough for this.#HeroILeague #ILeagueIConquer https://t.co/XBupzebhxV

It is certainly a huge thing for Indian Football and hopefully Real Kashmir FC’s journey will inspire many other small town football teams of India to achieve a new feat in the upcoming days.