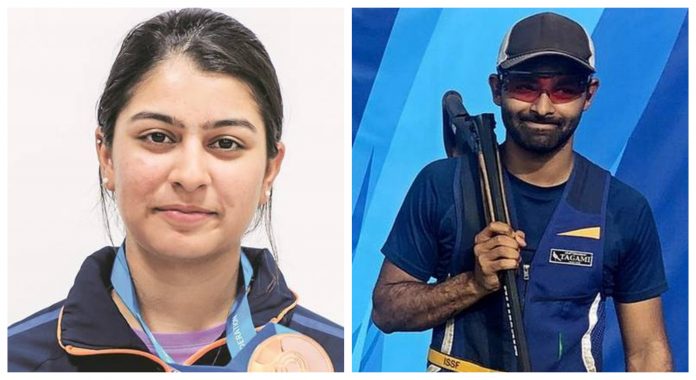 India continues its remarkable performance at the International Shooting Sport Federation (ISSF) World Cup as after gold and silver from the men’s and women’s skeet teams respectively, the mixed skeet team consisting of Ganemat Sekhon and Angad Vir Singh Bajwa have clinched gold on Tuesday in the national capital.

After finishing on top of the qualification round with a score of 141, the duo of Ganemat and Angad thrashed the Kazakhstani pair of Olga Panarina and Alexandr Yechshenko 33-29 to win the gold.

The success of the mixed team contributes to India’s dominance at the tournament, the table-toppers who have now tallied a total of seven gold medals at the world cup, along with four silver and four bronze medals.

“It’s another gold for India! The Skeet Mixed Team of @angadvirbajwa and#GanematSekhon win at the @ISSF_Shooting World Cup in Delhi after a 33-29 win over Kazakhstan,” the official Twitter handle of Sports Authority of India posted.

It’s another gold for India!
The Skeet Mixed Team of @angadvirbajwa and #GanematSekhon win 🥇 at the @ISSF_Shooting World Cup in Delhi after a 33-29 win over Kazakhstan. #Shooting #WorldCup pic.twitter.com/k72Jdd5vO4

Alongside the mixed team, both Ganemat and Angad had won medals separately in the men’s and women’s team events on Monday.

The 20-year-old Ganemat, who became the first Indian woman to ISSF World Cup medal in the women’s skeet event after winning a bronze on the third day of the tournament, won a silver along with her skeet teammates Parninaaz Dhaliwal and Karttiki Shaktawat after they were defeated 4-6 by Kazakhstan in the gold medal shootout.

On the other hand, the Men’s team, consisting of Mairaj Khan, Gurjoat Khangura along with Angad, trounced Qatar 6-2 to clinch the men’s skeet team gold