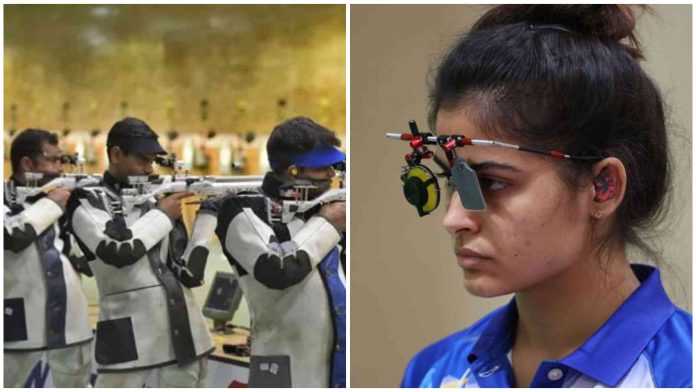 The Indian contingent heading for the upcoming ISSF World Cup next month in Cairo, Egypt has been announced as per the shooters’ performances at the 64th National Championship. The selection trials were cancelled due to the COVID-19 pandemic, leaving out Olympians like Manu Bhaker and others from the squad.

The qualification score, as well as the final ranking points of the athletes at the Nationals was taken into consideration as the parameters for the selection, which left out Bhaker, along with Apurvi Chandela, Anjum Moudgil, Abhishek Verma, Deepak Kumar and Yashaswini Deshwal, all who represented India at the Tokyo Olympics last year.

“Due to COVID-19 conditions in India, the selection trials, which were scheduled to be held in January 2022, were postponed. There was no time left for conducting the trials before selection of teams for ISSF World Cup, Cairo,” an official statement from the National Rifle Association of India (NRAI) read.

“The selection committee of the NRAI has decided to consider the Qualification score along with final ranking points of 64th National Shooting Championship Competition, to arrive at the final ranking for selection of teams for ISSF World Cup, Cairo, Egypt from 26th February to 8th March 2022,” the statement added.

The squad, accompanied by six coaches and two physios, will congregate at the Dr Karni Singh Shooting Range, New Delhi for camp on 9th February and will board the jet to Cairo on 25th February, a day before the World Cup commences.

Check out the full Indian shooting team announced for the ISSF World Cup below: