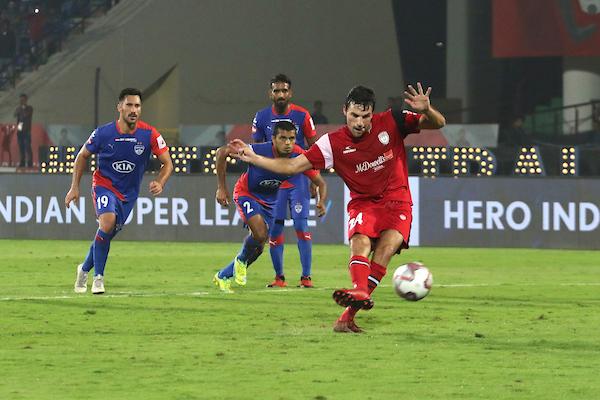 Northeast United FC’s extra-time penalty against Bengaluru FC at the Indira Gandhi Athletic Stadium in Guwahati gave them a slender advantage heading into the second leg of the ISL semi-finals. The scoreline was tied until the 95th minute when Uruguay’s Juan Mascia converted his penalty to finish it 2-1 for the Highlanders. Redeem Tlang and Xisco Hernandez were the other goalscorers for Northeast United FC and Bengaluru FC respectively.

Both the sides had done their homework as it was tough for either of the teams to break the opposition defense. The first shot of the game came from Northeast United FC’s Jose Leudo whose ambitious shot sailed over the crossbar in the 8th minute. As the clock ticked, the home side grew from strength to strength, with the Bengaluru FC forward line- comprising of Sunil Chhetri, Miku, and Udanta Singh- rarely getting a touch at the ball.

The moment of glory came in the 20th minute when Redeem Tlang gave Northeast United FC the lead. Dropping one shoulder to beat Nishu Kumar and making space for himself, the 24-year-old curled the ball into the far net with the rival goalkeeper Gurpreet Singh Sandhu left flabbergasted.

Bengaluru FC wasted little time to show urgency and nearly got their reward four minutes later. A scuffed clearance from the Northeast United FC defense, following Rahul Bheke’s throw in, fell in Dimas Delgado’s path just outside the penalty box. Pawan Kumar spilled the Spaniard’s initial shot but collected it just in time to prevent Miku from poking it in.

The game remained tepid throughout the remainder of the first half but ended on a sour note for Northeast United FC as their hitman Bartholomew Ogbeche had to be substituted following a hamstring injury. As the teams came out from the tunnel, the Highlanders’ problems only worsened as Indian international Rowllin Borges had to be taken off, too, due to a hamstring injury.

With Northeast United FC’s two key players missing in the second half, Bengaluru FC dictated the pace of the game. But, the Highlanders maintained their rigid shape in the defense to not give the visitors chances to exploit.

Bengaluru FC, finally, overcame the dogged resilience in the 85th minute through super-sub Xisco Hernandez. The attack began through the Venezuelan Miku, who freed Sunil Chhetri on the left flank. The captain took the ball to the byline, waited for Keegan Pereira to commit, and put the ball across the face of the goal. The Northeast United FC defenders didn’t mark the first post and, Xisco made them pay as he put it past Pawan Kumar in the near post.

The crowd’s deafening silence soon turned into that of frenzy as referee Santosh Kumar pointed towards the penalty spot in the dying embers of the game. Lalthathanga Khawlhring took his routine free-kick but, Harmanjot Singh Khabra restricted Juan Mascia’s movement by clutching his shirt and pulling him down. Although it looked controversial by the first look, replays confirmed that the decision to award Northeast United FC the penalty was spot on.

Juan Mascia held his nerves to do the needful and regain Northeast United FC’s lead. All is not over for Bengaluru FC as they will have a second bite at the cherry on 11th February at their own territory. But till then, Northeast United FC’s hopes of playing in the first ever ISL final took a giant step forward.