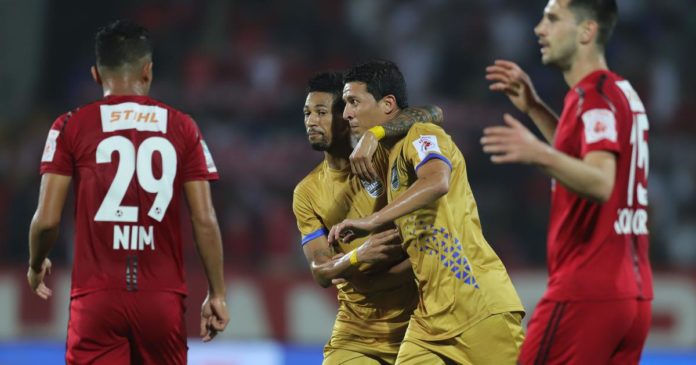 NorthEast United FC and Mumbai City FC played out an exciting 2-2 draw in the ISL on Wednesday with goals from Amine Chermiti, Panagiotis Triadis and Asamoah Gyan. 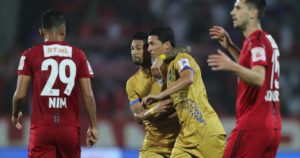 It was Panagiotis Triadis who opened the scoring for the hosts in the 9th minute when Sauvik Chakrabarti failed to clear the ball and gifted it to Triadis. The Greek international held his nerve to unleash a stunning strike that saw NorthEast go one up on the night.

However, following the goal, Mumbai fought back brilliantly and by the half hour mark saw themselves take a unexpected 1-2 lead. Modou Sougou cross from the right flank found Chermiti, who in turn converted an easy tap in to bring his team level.

Chermiti then scored again in the 32nd minute as Mumbai City took the lead on the night. Nim Dorjee’s failure to clear the ball of a free kick found the path of Chermiti, who sent the ball behind the net.

In a quick turn of events, Gyan equalised for NorthEast United just before the break. Mumbai looked aggressive following the break and churned out a number of chances. But crucial touches inside the box from the hosts still kept the scores level.

Amrinder almost cost the visitors the game after he fumbled a free kick and handed it straight to the hosts. But they failed to take advantage of it and sent the ball skywards.

The game finally ended in a draw with both teams settling for point. NorthEast are at 4th while Mumbai are stationed at 7th.