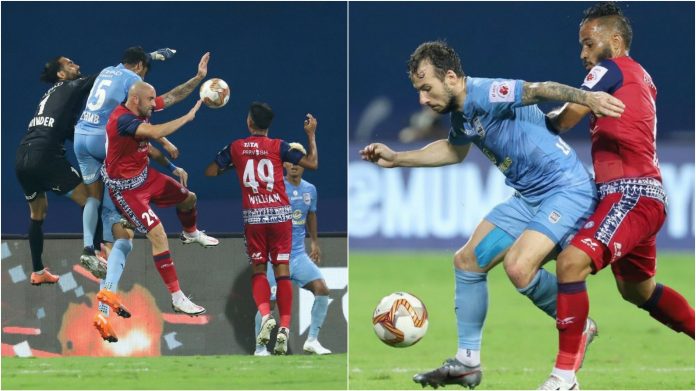 The clash between Jamshedpur FC and Mumbai City FC in the Indian Super League (ISL) on Monday at GMC Stadium in Bambolim ended all square with the scoreline showing 1-1.

It took only nine minutes for Owen Coyle’s men to net the breakthrough goal. Mumbai City’s mistake was capitalised by Jamshedpur as they scored.

Rowllin’s back pass went wrong as Mehtab Singh could not reach to it and Jackichand on the right flank was able to get hold of it and sent it to Nerijus Valskis, who netted the goal to give his team the lead.

However, Jamshedpur’s celebration lasted little as Mumbai City were able to pull back one goal within the following few minutes.

Bipin Singh delivered a good pass for Bartholomew Ogbeche in the middle, who makes a similar finish to Valskis but from the opposite angle.

Jamshedpur soon were a man down as Aitor Monroy was sent off after seeing the second yellow card following a foul on the goal scorer, Ogbeche.

Both the teams pushed each other to there limits in the first half, eyeing for goals. Goddard’s corner could have yielded a goal for Jamshedpur but Ogbeche missed a free header in the first half.