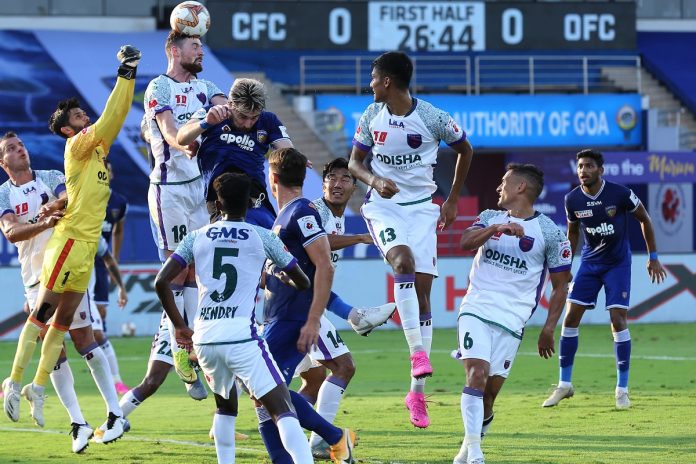 The clash between Chennaiyin FC and Odisha FC ended in a goalless draw in the Indian Super League (ISL) on Sunday at GMC Stadium.

Steven Taylor sent a poor pass from the back and Memo Moura picked up the loose ball and passed it to Chhangte. Chhangte cut in and struck a shot which went narrowly went wide of the near post.

Chennaiyin were moving the ball swiftly from one side to the other to put pressure on Odisha. Chhangte cut in from the right and took a left-footed shot which went over the bar.

Fatkhulo Fatkhulloev tried a brilliant freekick into the box but Eli Sabia headed it over the bar from close range.

Chennaiyin lacked swiftness as Chhangte sent a pass to Jerry L inside the box who passes it square at the edge of the area for Thapa whose first-time effort went wide.

Cole Alexander was able to find out Diego Mauricio from a long distance. He headed the ball into the net past goalkeeper Vishal Kaith. However, the linesman pulled back for an offside.

Goalkeeper Arshdeep was able to put up a couple of brilliant saves in the additional time of the first half. Sylvestr did well to hold up and laid off the ball for Rahim whose goal-bound shot was saved by Arshdeep.

Thapa sent a ball behind for Reagan, who whipped in a low cross into the six-yard area and Sylvestr got a shot with a backheel but Arshdeep saved it again.

Following the restart in the second half, Chhangte got in behind the Odisha defence yet but his attempt found the side netting for the second time in the game.

In the 71st minute, Ali wasted another great chance to register a goal. Steven Taylor made a mistake which left the youngster with only Arshdeep to beat again. This time he managed to do get a shot, but the ball struck the woodwork.

In the final ten minutes of the game for the major part the game was played in Odisha’s half as Chennaiyin tried to get the winning goal. However, the Odisha defence were tight and prevented them from scoring.