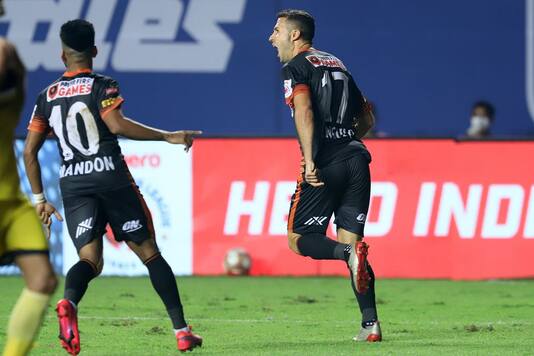 FC Goa made a huge comeback win over Hyderabad FC in a 2-1 contest in Indian Super League(ISL) on Wednesday at Tilak Maidan.

The first half was a cagey as both the teams restricted each other from creating any prominent chances. Both the sides prevented from penetrating into the attacking thirds.

In the first ten minutes of the game, FC Goa could have gone in the front. Brandon Fernandes had curled in the ball inside the box from a corner kick and James Donachie’s attempt of a header was not on target.

Goa got another chance when Lenny Rodrigues attempted a long-range shot from distance from Jorge Ortiz’s pass but the ball went wide.

Brandon Fernandes received a long pass on the left edge of the box and made space for himself. He sent in a cross for Igor Angulo who attempted a header. However, the ball went just above the crossbar.

Both the teams went into the dressing room with the deadlock as neither team scored the breakthrough goal in the first half.