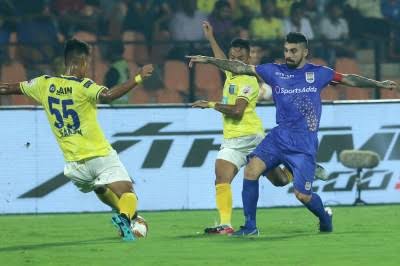 Two goals after the 70 minute mark saw the clash between Mumbai City FC and Kerala Blasters FC end in a exciting 1-1 draw. 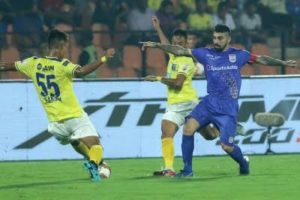 Messi Bouli opened the scoring in the 75th minute but Amine Chermiti equalised immediately to ensure Kerala went home with just one point.

While Kerala had the upper hand throughout the first half, dominating the play, they couldn’t go on to take the lead.

Jeakson Singh almost opened the scoring for the hosts but Amrinder with a good move saw him bring the chance to an end with a smart take.

The hosts then got their chance to take the lead when Sougou attempted to put the ball behind the net. But the shot lacked venom and ended up as an easy take for Rehenesh.

Finally in the second half of the game, Kerala took the lead, following a sleek one touch football inside the box. Messi taking advantage of poor defending from Mumbai struck home the opening goal.

Just minutes later, Mumbai City struck back in an attack that started with Sarthak Golui. His superb cross found Moudou who in turn set up Amine Chermiti. His follow up shot equalised the scores.

No more goals were possible in the game as the sides settled for a point each.