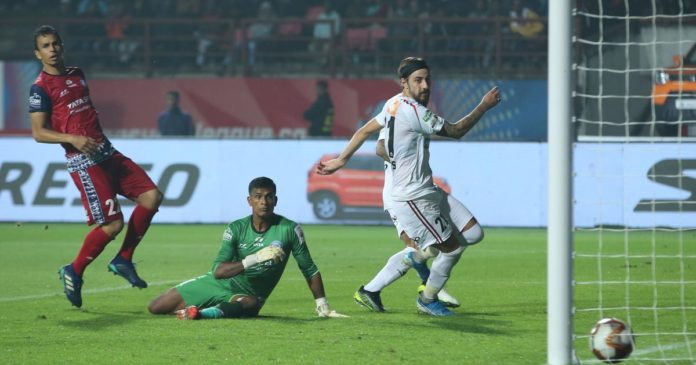 Jamshedpur FC thought that they had secured all 3 points after Sergio Castel’s fine first half strike. However, a 90th-minute equaliser from Panagiotis Triadis meant that NorthEast United still remain unbeaten. 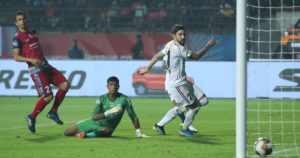 The hosts started off the game in front foot as NorthEast defence struggled to contain their forwards. Castel capitalised on the strong start and opened the scoring for the hosts in the 28th minute.

Aitor Monroy’s pass into the box found Farukh, who in turn laid the ball towards Castel. The Atletico Madrid loanee beautifully sent the ball behind the net to put his side one up on the night.

Coming back from the first half break, the visitors showed sings of getting back into the game and played in a more intense manner. Triadis and Gyan kept threatening the hosts but couldn’t convert their chances to bring the scores to a level.

Finally, the breakthrough came in the 90th minute when Gyan flicked a long ball into the path of Triadis. The latter skillfully took a shot that left Subrata Paul with no chance of stopping it.

Thus the goal saw both Jamshedpur FC and NorthEast United FC share the spoils. The result sees Jamshedpur in second place while NorthEast are stationed at 4th.