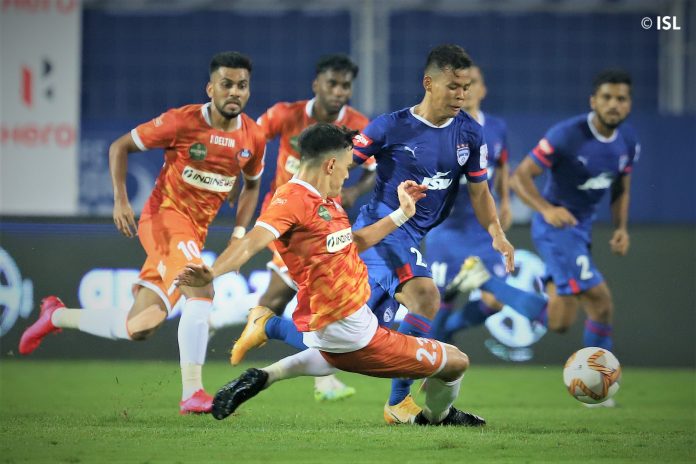 FC Goa made a turnaround against Bengaluru FC as the match ended after a four goals thriller at Fatorda Stadium. Both the teams have bagged one point each after a 2-2 draw.

Bengaluru FC could not hold onto the lead

The match on Sunday evening at Fatorda Stadium saw an epic comeback from the holder of League Winners Shield, FC Goa as they denied the two goal victory of Bengaluru FC.

The debutant Cleiton Silva made an early impact to the game as he put his team, Bengaluru FC in the front in the 27th minutes of the match.

After Harmanjot Singh Khabra’s long throw, Kristian Opseth got a touch and he guided it to Cleiton Silva. He came up with a great header to find the back of the net, followed by a spectacular acrobatic celebration.

The second goal for the blues came in the 57th minute after a right-footed shot from Juanan tallied the 100th goal for Bengaluru FC.

Just when Bengaluru FC thought that they would secure their first victory of this year’s ISL campaign, Igor Angulo Alboinga emerged as the saviour of FC Goa.

The Spanish International helped his team get in right back in the game after he registered the first goal for his team in the 66th minute.

At the outside of the box, Brandon made a pass to Jorge Ortiz Mendoza and he then found Angulo, whose shot was powerful enough to beat Bengaluru FC Goalkeeper, Gurpreet Singh Sandhu.

There was still a goal deficit for Juan Ferrando’s men but again it was Angulo who rose up to the occassion and scored the equalising goal for FC Goa.

Romario’s cross into the box was chested by the FC Goa’s hero of the night, Angulo and Sandhu was once again beaten.