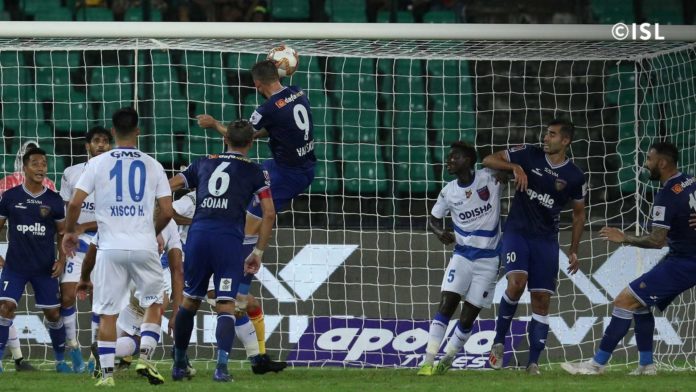 Chennaiyin FC played out a thrilling 2-2 draw vs Odisha FC in today’s Indian Super League clash. Having taken a 2-1 lead through Valskis’ brace, hosts Chennai thought to have secured all 3 points. But a late equaliser from the visitors meant that they had to share the spoils. 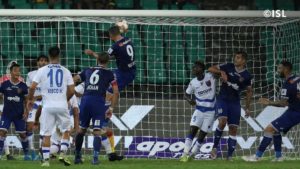 The first half ended goalless. But as soon as coming back from the break, Nerijus Valskis put Chennaiyin ahead in the 51st minute. Odisha hit back through Xisco Hernandez and leveled things up minutes later. Valskis put the hosts in the lead for the second time on the night but Aridane Santana once again leveled the scores.

After a first 45 minutes where Chennaiyin were confined to their own half, they immediately went ahead, profiting from a Bikramjit error. His misplaced pass found Raphael Crivellaro. A series of passes from there on saw the ball land before Valskis who tucked it away to help Chennaiyin take the lead.

Just 3 minutes later, Odisha hit back through Xisco. Couple of errors from Jerry inside the box proved to be decisive as Xisco fired home the leveler.

Despite Odisha’s goal, Chennaiyin FC created enough momentum and kept pushing towards the second goal. In the 71st minute, Crivellaro’s corner was delightfully met by Valskis, who beautifully headed the ball to the corner of the net to put Chennaiyin ahead for the second time on the night.

Odisha refused to give up and produced yet another stunning moment in the 81st minute when Guedes controlled the ball towards the path of Santana, who in turn struck it cleanly to send the ball behind the net and give Vishal Kaith zero chance of stopping it.

Valskis came close in the end and almost bagged the first hat-trick of the season. But his shot went wide of the post. Both sides had to settle for a point.