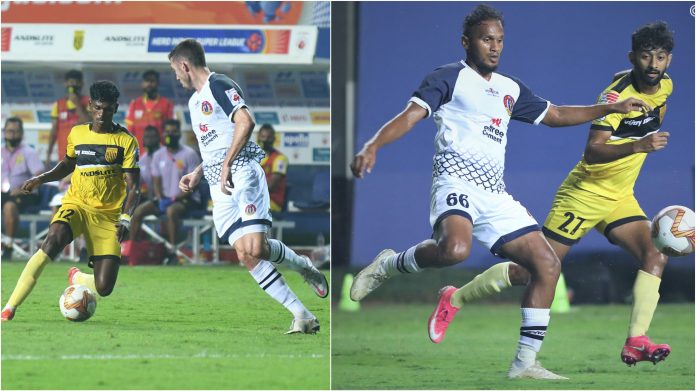 Hyderabad FC made a thrilling 3-2 comeback win against SC East Bengal in the Indian Super League (ISL) on Tuesday at Tilak Maidan.

The clash between Hyderabad FC and SC Bengal was a thriller of a contest as the former pulled off a great comeback win in the second half.

Hyderabad looked the better side on the pitch in the first half after continuous attack but did not yield any goal. They created several chances but ended up failing to keep the shots on target.

They held the ball and dominated the possession in the first half. The side’s ace striker Aridane Santana looked dangerous in every offensive approach but failed to net the goal.

However, East Bengal had their first chance in the 23rd minute when Sehnaj Singh delivered a ball from a free-kick but Pilkington could not manage to get hold of it and the Hyderabad defenders cleared the ball.

It was in the 26th minute when East Bengal registered their first goal in the ongoing ISL and got the lead in the match as Jacques Maghoma netted the opening goal.

With ten minutes remaining in the first half Hyderabad were awarded a penalty after Sehnaj Singh brought down Mohammed Yasir.

Goalkeeper Debjit Majumder pulled off an outstanding save to deny Aridane Santana to equalise.

Hyderabad and East Bengal started the second half with 1-0 scoreline.

The tables turned in the 56th minute of the game as Aridane Santana scored two goals coming within seconds apart.

The equalising goal came up after Mohammed Yasir curled in the ball from a free-kick and Santana’s header found the back of the net.

Yasir won the ball in the midfield and sent a pass to Liston whose flawless pass found Santana as he gave his side the lead,making a successful comeback.

Halicharan Narzary scored the third goal for the Nizams after Liston Colaco’s assist.

The match saw a late drama in the final ten minutes as East Bengal went on the verge of comeback as well when Maghoma scored his second goal of the night from a header.

But, the Red and Gold brigade could not level up the score relinquishing three more points once again in the ISL.