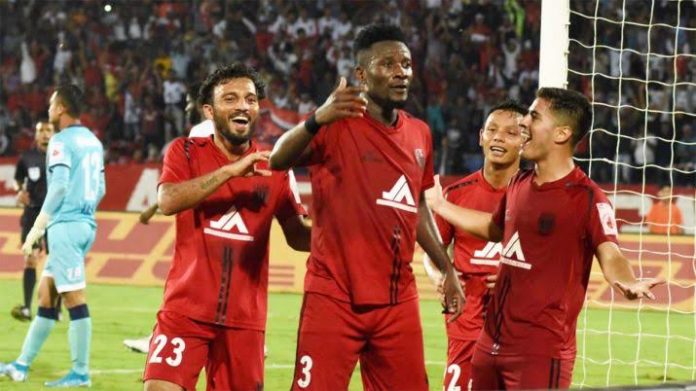 10-men FC Goa salvaged a point against NorthEast United FC in a thrilling 2-2 draw that saw an injury time equaliser. 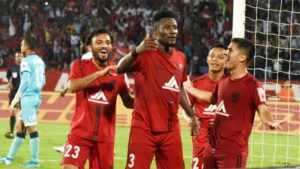 Goa went ahead in the first half due to Hugo Boumous’ strike. Two second-half goals from Asamoah Gyan and Redeem Tlang put NorthEast ahead. But Manvir Singh ensured Goa got a point after bagging a late equaliser.

The game began with both sides starting in a positive note. Boumous was denied initially after he hit the post but in the 31st minute, Corominas played a ball to Boumous who put it behind the net to open the scoring.

Second half saw NorthEast step up its efforts to find a goal. After Gyan spurned two big chances to pull his team level in the first half, he stepped up to pounce on Fall’s error and score the equaliser.

Subhasish tried to keep NorthEast in the game and pulled off a brilliant double save. Finally in the 74th minute, the home side went ahead after Tlang’s magnificent strike found the back of the net.

The game got further away from Goa’s grasp when Seiminlen Doungel was sent off following a poor challenge on Chaves. But the side somehow managed to get a point when Manvir scored an injury time equaliser after heading it past the goalkeeper inside the box.

This sees both Goa and NorthEast with 5 points. Goa are placed third on the table, one ahead of their opponents due to a superior goal difference.