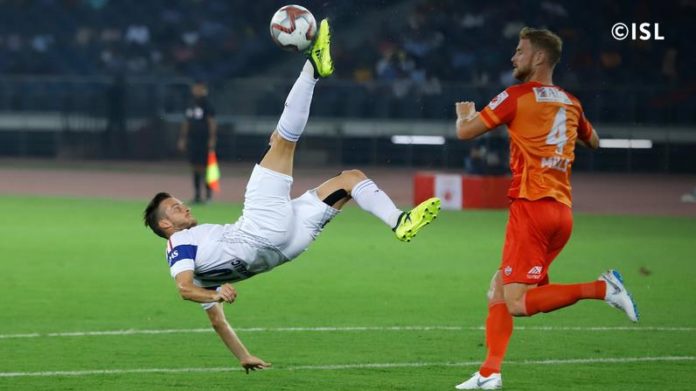 FC Pune City traveled to the Jawaharlal Nehru stadium in Delhi to take on Delhi Dynamos in the last game of the first matchday of Hero Indian Super League season 5. Joseph Balague lined the home side in a 4-2-3-1 formation with former Serbian international Andrija Kaluderovic being the lone man up front. On the other hand, Miguel Portugal lined his men in an unconventional 4-1-4-1 formation with Emiliano Alfaro given the charge to score goals.

FC Pune City could have taken the lead at the 4th-minute itself when Chhuantea Fanai played a brilliant ball down the left flank towards Ashique Kuruniyan. The onrushing Alfaro had failed to arrive in time to meet the resultant cross and squandered the opportunity. Ashique continued his galloping run down the left wing but the defense did well enough to avert the danger.

Delhi Dynamos could have taken the lead at the 20th-minute when Chhangte got into the box and squared it for Nanda Kumar. The 22-year-old’s shot from the close range, however, sailed across the bar. Nonetheless, Delhi Dynamos drew the first blood at 44th-minute. Rana Gharami had unleashed a scorcher 40 yards away from the goal-line which left Vishal Kaith open-mouthed. The goalkeeper had no chance whatsoever to save the goal.

Delhi Dynamos didn’t slow the pace after coming out from the tunnel and created a lot of half-chances in the opening stages of the second half. However, FC Pune City had got the first clear-cut chance when Nanda broke Delhi’s offside trap and squared a lovely ball for Kaludjerovic only for the Serbian to fumble his control and unleash a weak left-footed effort.

FC Pune City continued pressing hard for goals but Dorronsoro positioned himself perfectly to thwart away any danger. At the 85th minute, Chhangte dribbled across two defenders and found himself in a one-on-one situation with the goalkeeper. However, his shot lacked any power and, Dorronsoro put it away comfortably.

Finally, FC Pune City got a goal back courtesy of the substitute Diego Carlos. Alfaro and Carlos combined beautifully in the left side of the pitch, and the Brazilian’s shot had so much venom in it that the goalkeeper could do nothing about it despite positioning himself perfectly. It looked as if Delhi Dynamos had won a penalty at the 93rd minute when substitute Shubham Sarangi’s shot from inside the box struck the arm of Matt Mills, but the referee deemed it unintentional.

The referee had blown the final whistle moments later as Delhi Dynamos’ players and the coach looked dejected sharing the spoils. Delhi Dynamos and FC Pune City, both have a long break in hand as they take on ATK on the 17th of October and Mumbai City FC on the 19th of October respectively.