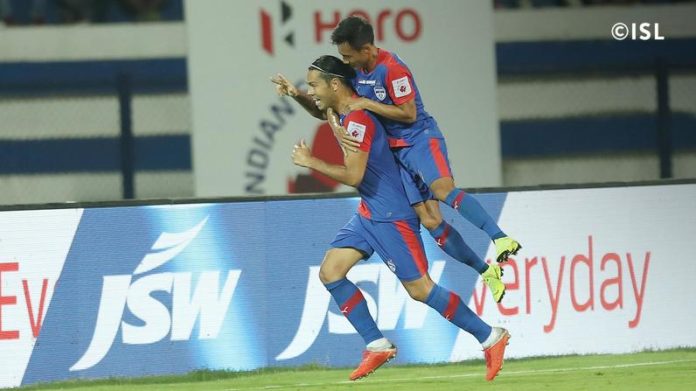 Bengaluru FC toppled Chennaiyin FC in their opening encounter of ISL Season 5 and grabbed all the three points. Carles Cuadrat lined his men in a 4-2-3-1 formation with Miku playing the lone striker. John Gregory, too, proceeded with the same formation with Jeje spearheading the attack and, Gregory Nelson, Raphael Augusto, and Francis Fernandes lined up behind him.

The first clear-cut chance of the game had gone to Chennaiyin FC in the 15th minute when Raphael Augusto found space for a free header off a Gregory Nelson corner but headed it inches wide. The Marina Machans could have taken the lead four minutes later too as Nelson gave a brilliant through ball to Jeje who found himself one-on-one with the goalkeeper. However, the Mizo sniper instead decided to pass the ball to Germanpreet who couldn’t get there in time. In the 33rd minute, Rahul Bheke gave a feeble back-pass to Gurpreet which had been intercepted by Jeje again. The Mizo sniper had even gone across Gurpreet, but the ball got tangled between his legs and went out of play.

Despite the flurry of attacks from the away side in the first half, the deadlock was broken by Miku in the 41st minute. Xisco gave a neat pass to Miku who had come from behind to beat the offside trap. The Venezuelan had injected so much power in his shot that the ball found the back of the net before Karanjeet could even complete his dive!

The second half began with a tepid pace as both the sides came out of the tunnel with a ‘safety first’ approach. Chennaiyin could have been reduced to 10 men in the 58th-minute when Udanta had whizzed past Jerry Lalrinzuala only for the 20-year-old to throw in a sliding tackle. The referee opted to give a yellow card to the Mizo fullback instead as Udanta had been going away from the goal. Chennaiyin had crowded in Miku which didn’t give the Venezuelan any free space to breathe. Whereas, Erik Paartalu and Harmanjyot Khabra did a brilliant job to thwart Chennaiyin’s attacking prospects in the midfield itself.

Chennaiyin could have equalized in the 91st minute when Nelson cut in from the left side and released a venomous shot from inside the box. However, Gurpreet positioned himself perfectly to avert the danger. The referee blew the final whistle three minutes later, and Cuadrat and his men rejoiced as they got the first three points of the season.