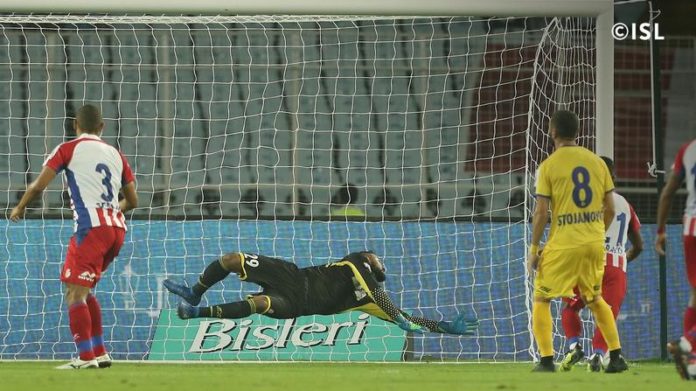 The 2018-19 edition of Hero Indian Super League commenced today at the Salt Lake Stadium in Kolkata. In the season opener, Kerala Blasters thrashed a clumsy ATK side much to the home fans’ dismay.

Kerala Blasters had blazed all their guns from the word go and could have taken the lead in the 4th minute itself when Lalruatthara’s cross found Matej Poplantik, but the Slovenian headed the ball wide. Five minutes later, Lalruatthara again delivered a beautiful cross down the left flank, but Poplatnik’s shot was blocked by Gerson Viera. ATK, too, squandered their chances in the first half when Dheeraj failed to collect a cross from the corner in the 39th minute, and the ball fell mercilessly towards Jayesh Rane. However, the ATK midfielder headed it wide albeit the empty net.

The second half had the same story with both the sides blowing away golden opportunities. However, the deadlock was finally broken in the 77th minute. Courage Pekuson, who came on the pitch in the second-half, laid off the ball for Stojanovic but got a foot of Gerson instead. The ball ricocheted towards Poplatnik who headed home the ball comfortably to give Blasters the lead. Kerala Blasters sealed the deal in the 86th minute when Pekuson played a lovely ball towards Stojanovic, who dribbled across Gerson, and curled the ball straight into the top corner.

Kerala Blasters were the better side and unquestionably deserved to win the game. However, both the teams can’t splurge the opportunities they had in their hand. ATK, particularly, showed no signs of urgency in the midfield and gave away possession extremely cheaply in the first half.

ATK will next take on North East United on the 4th of October whereas Kerala Blasters will take on Mumbai City FC the day later.