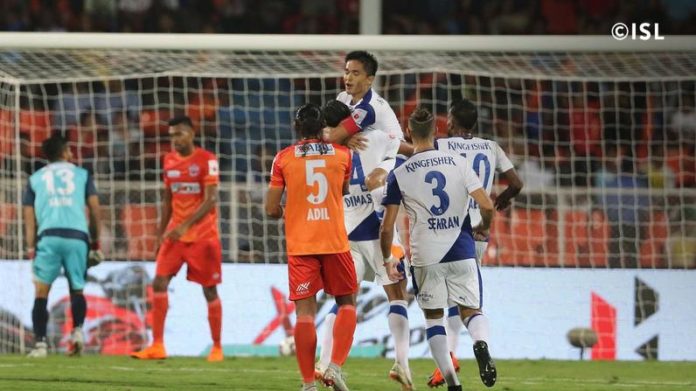 Bengaluru FC continued their stupendous form in the Hero ISL 2018-19 by picking up three points over FC Pune City at the Balewadi Sports Complex courtesy of a brace from Sunil Chhetri and Miku’s goal at the 64th minute.

The match started on a cagey side with the action restricted at the center of the pitch. It was the home side who got the first shot at glory when Marcelinho’s free-kick was punched away by Gurpreet. However, after that, it was all Bengaluru FC as they dominated the possession and troubled the opponents at every instance.

Sunil Chhetri could have broken the deadlock at the 40th minute itself when he failed to tap in Udanta’s inch-perfect cross from a hand-shaking distance. The captain, however, did make amends for it a minute later when he beat the offside trap and slotted it past a hapless Vishal Kaith to draw first blood. The #11 showed no signs of complacency as he dribbled past Sarthak Golui to double the lead.

Bengaluru FC tripled it as the game resumed after halftime when Miku brushed past Sahil Panwar with his built and control to rocket it past the goalkeeper. The Men in Orange did come close to score a consolation with substitute Diego Carlos’ shot at the 65th minute hitting the woodwork and Marcelinho’s long ranger at the 89th minute taking a deflection off Juanan to land safely in the hands of Gurpreet.

Sunil could have completed his hat-trick at the dying minutes of the game when he stepped up to take a free kick just outside the penalty box. His shot did manage to be on target, but Vishal dived full stretch and gloved it across to hit the goalpost.

The referee blew the final whistle seconds later as the Stallions stared at a 3-0 home defeat. With this victory, the Blues find themselves on the top of the table pipping Northeast United FC on goal difference.