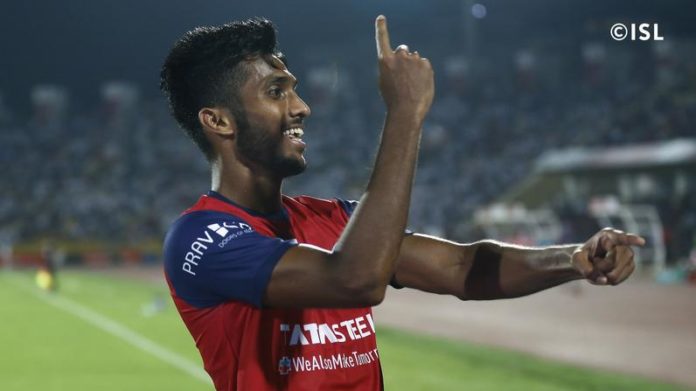 Northeast United FC and Jamshedpur FC shared the spoils in a tight encounter at the Indira Gandhi Athletic Stadium in Guwahati on Thursday. Bartholomew Ogbeche put the Highlanders on the front foot at the 20th minute before Farukh Chowdhury restored parity for the away side. Centre back Mislav Komorski also saw a red card at the stroke of half-time after recklessly elbowing Carlos Calvo.

The game embarked on a slow pace with both the sides playing safety first. The first attacking move of the game took place at the 13th minute when Gallego gave a through ball to Ogbeche whose resultant shot went wide. However, the away side faced the brunt of the Uruguayan-Nigerian duo when Ogbeche found the back of the net 7 minutes later.

Jamshedpur pressed hard for an equalizer but Northeast United defense maintained their solidarity. However, their centre-back Komorski was given the marching orders after elbowing Carlos Calvo before the side went into the tunnel.

The half-time talks from Cesar Ferrando did wonders for the Men in Red as Farukh Chowdhury netted in a volley from Pablo Morgada cross. Northeast United FC were completely on the back foot for the remainder of the game as Jamshedpur looked to capitalize on the extra man advantage. However, they couldn’t build the game with the short passes and had to settle for a draw.

With this tied result, Northeast United again climb to the top of the table with 2 wins and 2 draws from four games. Jamshedpur FC find themselves on the fourth position with a win and three draws from as many games.