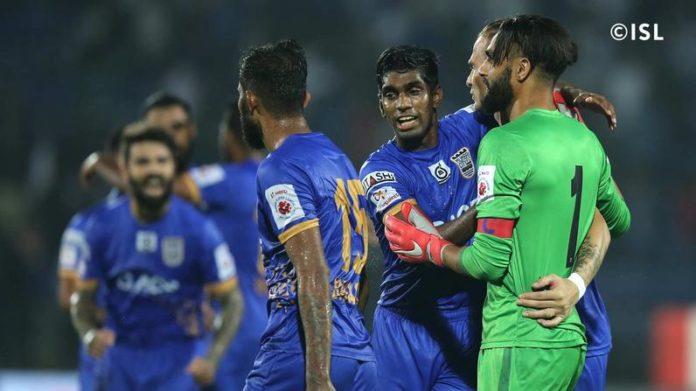 Mumbai City FC ended the unbeaten run of Northeast United FC in the 2018-19 Hero ISL by pulling off a 1-0 victory at the Indira Gandhi Athletic Stadium in Guwahati on Friday. With this win, Mumbai City FC climb to the third position with 13 points from seven games. On the other hand, Northeast United FC stumble to the fifth position with 11 points from 6 games in their kitty.

The visitors couldn’t have asked for a better start to the game as they broke the deadlock at the fourth minute itself. After a scramble outside the six-yard box and confusion, referee awarded the goal to Arnold Issoko, although replay showed that he touched the ball with his hand. The home side could have leveled things up at the 23rd minute when Ogbeche outran his marker to head home a Redeem Tlang cross. However, the ball grazed past the sidelines.

The second half started with end-to-end action as both the sides looked ahead to score a goal. Slowly and steadily, it was Northeast United who dictated the game of the pace with Mumbai City FC relying on counter. Both the sides came agonizingly close to change the scoreline but it read 1-0 at the final whistle.