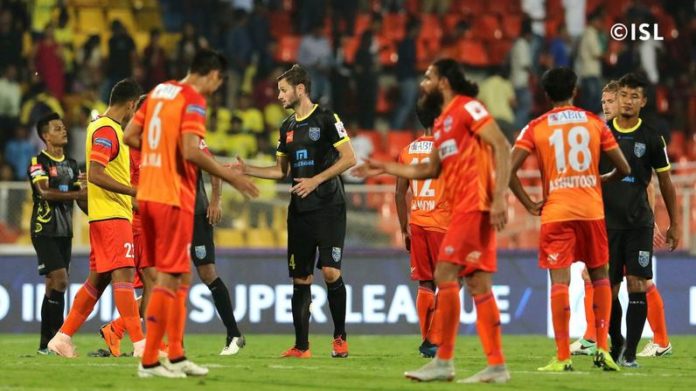 Kerala continued their string of draws as they shared the spoils against FC Pune City at the Balewadi Sports Complex in Pune in an action-packed encounter. With this draw, Kerala Blasters climb to the fifth place on the table with 7 points from 5 games. On the other hand, FC Pune City now has two points from 5 games and are just above defending champions bottom-placed Chennaiyin FC.

Kerala Blasters began the match on the front foot and created multiple chances in the opening ten minutes of the game. However, it was the Stallions who drew first blood at the 13th minute when Stankovic rocketed in his free-kick from just outside the box.

The game took a controversial turn at the 41st minute when a scramble saw a laid down Alfaro handle the ball with his hands to deny the ball from crossing the line. It seemed as if the ball had crossed the line and referee had given a goal to the visitors. However, after consulting with the assistant, the decision was overturned and free kick was awarded to FC Pune City.

The home side could have doubled the lead at the 56th minute when Krcamarevic nudged Alfaro inside the penalty box and referee awarded the penalty. However, the Uruguayan blasted the shot against the crossbar and missed it. Krcamerevic made them pay dearly as Gurtej’s feeble clearance fell straight in the path of him who slotted it past Kamaljit with a fierce shot.

FC Pune City pressed hard to regain their lead and Kerala looked to pounce on the counter, nut the final scoreline read 1-1.  Tomorrow’s game would see Mumbai City squaring off against Chennaiyin FC in the latter’s home ground.