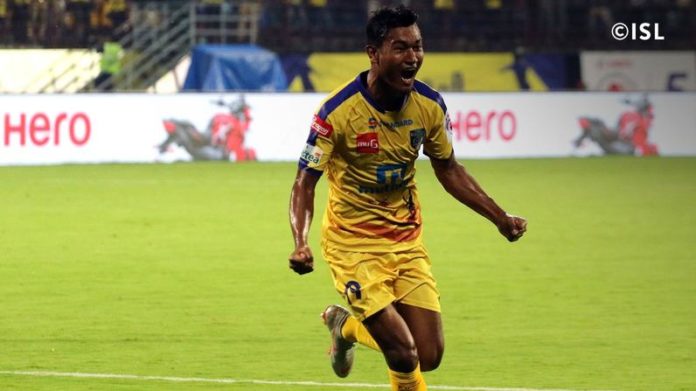 Mumbai City FC traveled to Kochi to take on Kerala Blasters on the Jawaharlal Nehru Stadium. David James had fielded an unchanged side as Kerala Blasters hoped to continue their winning run. On the other hand, Mumbai City FC had made four changes to their side as they looked to bounce back from the 2-0 defeat in the hands of Jamshedpur FC.

Kerala Blasters dominated the proceedings in the early minutes of play and could have taken the lead at the 3rd minute itself. Poplatnik gave a wonderful long through ball to Holicharan Narzary who squared it off for an onrushing Seimenlen Doungel. Amrinder Singh, however, positioned himself perfectly and stuck out his left boot to thwart away the shot on target. Mumbai City FC had got their own chance to take the lead at the 21st-minute when Machado’s free-kick towards the far-post area was met out by a towering Goian. However, the Romanian’s header was inches wide.

Finally, the Doungel-Narzary partnership had borne fruits for the Kerala Blasters when they broke the deadlock at the 24th-minute. Stojanovic gave a fabulous back heel pass to Seimenlen Doungel who crossed it on the path of an unmarked Holicharan Narzary. The Indian international made no error and hammered it across Amrinder to give Kerala Blasters the lead.

At the 82nd-minute, substitute CK Vineeth gave a lovely cross-field pass to Pekuson on the right wing. The Ghanian had given an inch-perfect pass to Stojanovic who was standing unmarked on the penalty spot. However, the Serbian shot it wayward and couldn’t find the back of the net.

At the 84th-minute, Dheeraj fumbled to collect a cross and was out of position in a certain instant. Mirabaje spotted it and shot the ball straight towards the goal. However, the U-17 World Cup star did a fabulous job to come back to his position and avert the danger.

At the 87th-minute, Sougou had missed a golden opportunity to score his opening goal in the ISL when Dheeraj again fumbled to collect a long ball from Amrinder and Goian shielded the 18-year-old to give the Senegalese a shot at glory. However, the 33-year-old failed to connect the volley and slam it across an empty net.

Finally, Pranjal Bhumij amended all the errors his team had done when his blinder equalized for the away side at the 93rd minute. Dheeraj had stretched full on to save the 35-yard piledriver from the 19-year-old but remained fingertips away.

The referee blew the final whistle two minutes later as the scoreline read 1-1 in what had been a tale of two halves. Tomorrow’s game will feature FC Goa heading to the Marina Arena to lock horns with Chennaiyin FC before ISL goes for a 11 day break.