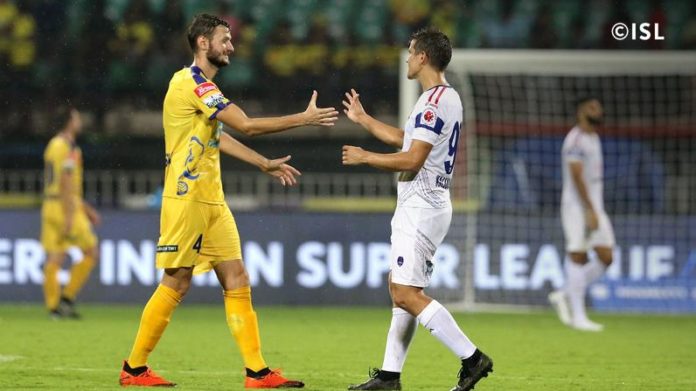 Delhi Dynamos and Kerala Blasters shared the spoils at the Jawaharlal Nehru Stadium in Kochi courtesy of goals from CK Vineeth and Andrija Kaluderovic in the second half.

Delhi Dynamos started the game on a front foot as Lallianzuala Chhangte looked very lively on the left side of the pitch with Rakip unable to hold him. However, it was Kerala Blasters who had the first clear chance when Holicharan Narzary’s long ranger glanced over the crossbar at the 18th minute. Six minutes later, Lalruatthara misjudged the flight of Chhangte’s cross and ended up brushing the ball from his right hand. However, the referee didn’t deem it worthy for a penalty.

At the 41st minute, Romeo found Mihalic’s lobbing pass on the right wing and laid it off for an unmarked and onrushing Zuiverloon. However, the Dutch missed the sitter as his shot was off target. Delhi’s tryst with missing chances continued when Crespi’s clear header off a Pritam Kotal’s cross sailed across the crossbar four minutes later.

Kerala Blasters punished the Dynamos for wasting their chances in the first half when CK Vineeth drew first blood at the 48th minute. Delhi’s sloppy clearance from a Stojanovic corner fell straight in the path of substitute Poplatnik who passed it towards the Keralite. The 30-year-old turned away from his marker, and his left-footed shot found the back of the net.

Delhi Dynamos leveled things up at the 84th-minute mark when Andrija Kaluderovic scored. Sandesh Jhingan was supposed to mark him, but he pulled his muscles moments earlier. As a result, the Serbian got a free header and made no mistake in rocketing it past the keeper.

Delhi Dynamos could have taken the lead at the 90th minute when Bikramjit found himself in a one-on-one position, however, he had failed to time his run properly and the assistant referee raised his flag. CK Vineeth cut in from the left wing at the dying minutes of the game but was challenged harshly by Pritam Kotal inside the penalty box. The referee was right there at the thick of actions but didn’t award a penalty to the Blasters.

After this draw, Kerala Blasters sit at the second position while Delhi Dynamos find themselves at the eighth position. Tomorrow’s action would see ATK locking horns with Jamshedpur FC at the latter’s home ground.