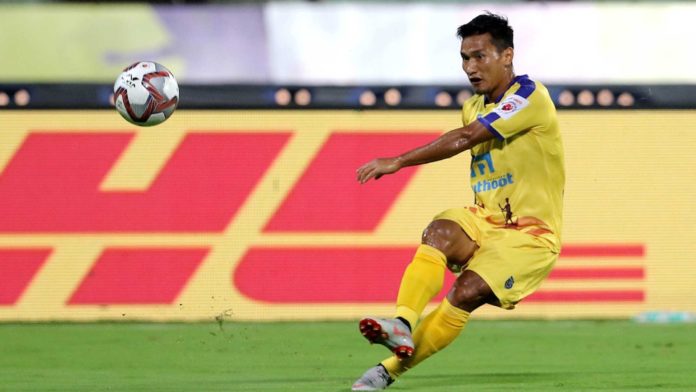 Jamshedpur FC and Kerala Blasters played out a 2-2 draw at the JRD Tata Sports Complex on Monday. The game was a tale of two halves as Tim Cahill and Michael Soosairaj got their names on the scoresheet for the Red Machines in the first half. However, substitute Seimenlen Doungel’s two assists in the second half ensured they didn’t walk away with the maximum points.

The home side couldn’t have asked for a better start to the game as Tim Cahill headed the ball in from an inch-perfect Sergio Cidoncha corner kick at the third minute. Kerala Blasters tried to claw back into the game, but Soosairaj played spoiler to their plans as his shot from just inside the box found the bottom right corner.

The halftime scoreline read 2-0 in favor of Jamshedpur, but their coach Cesar Ferrando still looked unhappy as they gave away possession multiple times cheaply. As the game resumed from halftime, David James tweaked his formation to a 3-5-2 with Jhingan, Lakic-Pesic, and Cyril Kali in the back and Mohammad Rakip and Sahal Samad as the wing-backs.

Kerala got rewarded for their formation change as Stojanovic won a penalty for them at the 55th-minute mark. However, Subrata guessed it right and saved the penalty. Seimenlen Doungel made an instant impact from coming off the bench as his cross was volleyed in by Stojanovic at the 71st minute.

It was deja vu again for the Blasters at the 86th minute with CK Vineeth in place of Stojanovic as he netted the ball in. The final scoreline remained 2-2 as Kerala lodged a brilliant comeback to level things up with Jamshedpur FC.