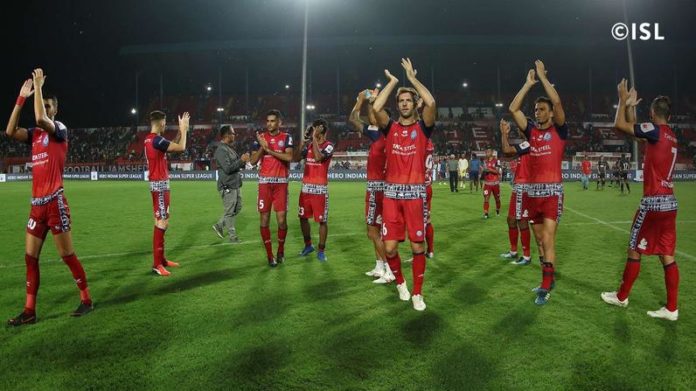 Jamshedpur FC and ATK played out a 1-1 draw at the JRD Tata Sports Complex on Sunday. Sergio Cidoncha had given the home side the lead when Arindam Bhattacharya misjudged the trajectory of his free kick. Manuel Lanzarote restored parity for the away side when his in-swinging corner found the back of the net directly after Subhashish Roy Chowdhury failed to palm it away.

The Men of Steel started the game on a front foot with Soosairaj looking dangerous on the left wing. However, John Johnson and Gerson Viera held their ground firm to thwart away the resulting crosses.

Jamshedpur FC got the first shot at glory at the 15th minute when Soosairaj dribbled past Aiborlang Khongjee and crossed in towards Cidoncha. The Spaniard’s shot, however, was straight at the goalkeeper who punched it away.

The home side finally managed to break the deadlock at the 35th minute when Cidoncha got fouled by Pronay Halder just outside the penalty box. The resultant free kick took an awkward bounce from the turf and surged above Arindam to reach the back of the net.

However, the joy was short lived as Manuel Lanzarote leveled things up for ATK at the stroke of halftime. The Spaniard’s corner swung in dangerously, but Subhashish should have palmed it away. However, the ball, instead, glided sideways and made it to the top corner.

Cesar Ferrando looked frustrated as his team had more shots on goal but failed to convert it. As a result, both the sides went into the halftime tunnel with level peggings.
Unlike the frenetic pace of the first half, the game slowed down at the second half.

Jamshedpur FC could have taken the lead again at the 62nd minute when Mario Arques’ inch-perfect long ball found Tim Cahill’s head. However, the Australian’s header from inside the six-yard box fell straight into the hands of Arindam.

Jamshedpur FC could have walked away with three points at the 93rd minute when Mario Arques rose highest to substitute Carlos Calvo’s cross. However, the Spaniard’s towering header sailed across the crossbar.

Steve Coppell should consider himself lucky as his side escaped the Steel City with a point. Jamshedpur had a flurry of chances but miscued it on the final third.

With this draw, Jamshedpur find themselves sitting at the second position thanks to superior goal difference over Kerala Blasters. ATK, on the other hand, sit on the seventh position with four points from four games.