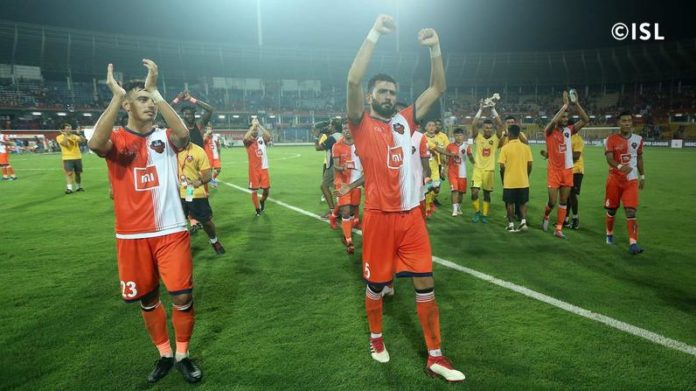 FC Goa cruised past a hapless Mumbai City FC at the Fatorda Stadium in Goa to sit on the pole position with the final scoreline reading 5-0.

FC Goa took the lead at the 5th minute when Souvik Chakraborti committed a horrendous sliding tackle from behind in the penalty box. Coro stepped up to take the penalty and gave Amrinder no chance whatsoever. FC Goa gave away cheap free-kicks as the game wore on, but the Islanders failed to capitalize on it.

After abysmal misses from both the sides in the first half, FC Goa doubled the lead courtesy of Jackichand Singh at the 55th minute. With confidence oozing on them, FC Goa showed no mercy as Edu Bedia chipped the ball past Amrinder after Coro’s inspiring back-pass.

Substitute Miguel Palanca, who came in place of Coro, added his name to the scoresheet slamming the ball at the back of the net at the 84th and 90th minute.

FC Goa would love to continue their stupendous form when they take on FC Pune City on 28th October. On the other hand, Mumbai City FC would like to forget this performance and hope to bounce back against Delhi Dynamos on 27th.